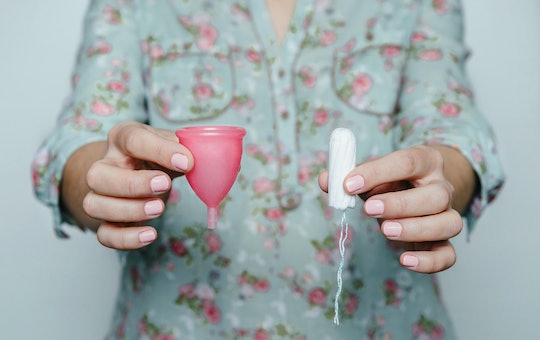 Here's The Deal With Using Tampons After You've Had A Baby

Since postpartum bleeding is a very real thing, you'd think tampons would be a pretty useful tool to keep the leaking to a minimum. But when can you use a tampon postpartum? After all, if you've given birth vaginally (and even if you haven't) you're going to be sore, so sticking anything up anywhere might not be the best post-baby decision. Thankfully experts have the answer, and some suggestions, to help you deal with postpartum life like the boss mom you are.

According to Karolyn Pahl, PhD and BabyCenter expert, every postpartum woman should wait at least six weeks before using a tampon, regardless of how she gave birth. The reason behind the six week wait, according to Pahl, is because "the inner lining of your womb (uterus) is shedding and passing out of your vagina. This period-like discharge is called lochia." Whether you had C-section or a vaginal birth, you'll have lochia.

Even Tampax (and I don't know about you, but I consider the company to be experts in all things tampon related) suggests you not use a tampon for at least four weeks after giving birth. While their suggestion is two weeks less than the previous suggestion provided by Pahl, tampons explains, "After the birth, you will have a pink-brown discharge, and you will need to wear sanitary pads to stop it from staining your clothes." Of course and always, it's important that you ask your OB-GYN and/or health care provider before using a tampon at any time postpartum.

Another reason why you can't use a tampon until six weeks after you give birth is because your womb is at a risk for infection until it fully heals, according to BabyCenter. Pads are the best option for taking care of that discharge, as tampons can increase your risk of infection where the placenta separated from the uterine wall. According to BabyCenter, "Tampons could introduce bacteria, so it's safest not to use them until the lochia has stopped and you've completely healed inside." For what it's worth, BabyCenter says you won't want to use any sanitary pads, either. Maternity pads are softer than sanitary pads and more absorbent for the discharge you're dealing with postpartum.

At your six and/or eight week postpartum appointment, Health Pages says your doctor can let you know whether the lochia has fully stopped, your body has healed, and you're ready for tampons (and sex) again. If you're healed properly and your doctor gives you the OK, you can start using tampons at your leisure. Of course, it's worth noting the entire process might feel a little strange at first, so it's not uncommon for women to continue using pads until their vagina has fully healed from birth.

For example, Tampax reports that most women don't use tampons on their first period after giving birth, saying, "Most women wait until their second period after childbirth before they decide to use tampons after pregnancy. If your period has changed, you may need to use different absorbency tampons than the ones you used before."

So when is your period likely to return? For some women who breastfeed, their period might not return until after they wean and stop nursing. That doesn't mean that they aren't ovulating or can't get pregnant, though. So, as always, it's important you discuss birth control options with your primary care physician before engaging in sexual activity.

More Like This
Does Pumped Breast Milk Have Antibodies? Experts Weigh In
Why Does My Baby Cough While Breastfeeding? Experts Explain
Banana Boat Sunscreen Has Recalled Products That Were Found To Contain Benzene
In Search Of New York City's Most Luxurious Birth Experience