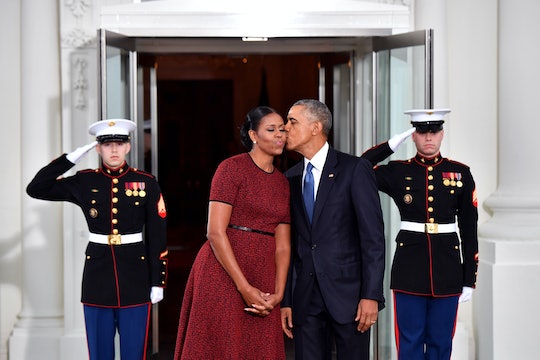 While the dynamic duo may be out of the White House, the Obamas won’t disappear from public eye that easily, or anytime soon. President and Michelle Obama have both signed book deals with Penguin Random House, the publishing company reported on Tuesday. While both Obamas have already had at least one book published, these new deals indicate a more in-depth look at their time in the White House, and perhaps more personal details than have been revealed before. So, when can you buy the Obamas' books? Well, the ink is still drying, my friends, so you might have to wait.

A reported “bidding war” of sorts took place for the rights to the Obamas' memoirs, according to several sources. And while no exact numbers were released, it’s suspected that the offers were in the range of tens of millions of dollars. The former president and first lady have only been out of the White House for a little over a month, but they’ve already made moves to get back to work with their very own Obama Foundation. The non-profit seeks to “focus on developing the next generation of citizens — and what it means to be a good citizen in the 21st century." Any subsequent media placement, then, was sure to pick up plenty of buzz.

Several sources have also claimed that the bidding for the deal saw upwards of $60 million. In a statement released Tuesday, Penguin Random House also stated that:

We are absolutely thrilled to continue our publishing partnership with President and Mrs. Obama. With their words and their leadership, they changed the world, and every day, with the books we publish at Penguin Random House, we strive to do the same. Now, we are very much looking forward to working together with President and Mrs. Obama to make each of their books global publishing events of unprecedented scope and significance.

The deal also stipulates that Penguin Random House must donate 1 million copies of the books to First Book, a nonprofit based in Washington. It’s also expected that the Obamas will donate a large amount of their profits from the deal to charity, such as the Obama Foundation, along with others.

And while both of the books are set to be bestsellers, no set date has been given for their release as of yet. So, hold on to your hats, America, and keep on keeping on. The Obamas' books will come, and until then, you can enjoy these titles by President Obama, and this one by first lady Michelle.