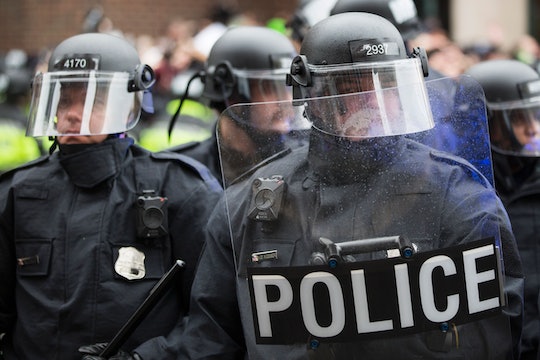 Can You Photograph Police At The Women's March?

If you're joining the Women's March on Washington this weekend — or taking part in any of the protests that are springing up around the country — chances are you may run into police monitoring the protests. If you're taking pictures of any protests, though, or of conflicts between police and civilians, you may find yourself wondering when you can film and photograph police.

According to the American Civil Liberties Union (ACLU), people are legally allowed to film or take pictures of anything that's in a public space — police officers included. Public spaces include streets, sidewalks, and public parks. The Constitution protects that right, so if you're filming police in a public location, they shouldn't ask you to stop.

That constitutional right, however, doesn't mean you can record others' private conversations, go onto private property, or interfere in police officers' work. As Delroy Burton, the chairman of D.C.’s metropolitan police union, told The Atlantic in 2015:

If you’re standing across the street videotaping, and I’m in a public place, carrying out my public functions, [then] I’m subject to recording, and there’s nothing legally the police officer can do to stop you from recording.

If you want to make sure you're not interfering, Burton suggested filming from a few steps back. "Record from a distance, stay out of the scene, and the officer doesn’t have the right to come over and take your camera, confiscate it," he said.

That's another important point to note: without a warrant, police officers are not allowed to confiscate, ask to view, or delete your footage. However, as the ACLU noted, some police officers will ask citizens to stop filming or will demand the footage, so it's important to know your rights.

"If it were me, and an officer came up and said, ‘You need to turn that camera off, sir,’ I would strive to calmly and politely yet firmly remind the officer of my rights while continuing to record the interaction, and not turn the camera off," Jay Stanley, a policy analyst at the American Civil Liberties Union, told The Atlantic. He continued:

If an officer asks you to back up, make sure you do. Continue filming while making sure you steer clear of officers' space and allow them to continue their work. After all, you don't want to hinder them — but filming and taking pictures is well within your rights, and it's an important, necessary way to help keep authorities accountable.