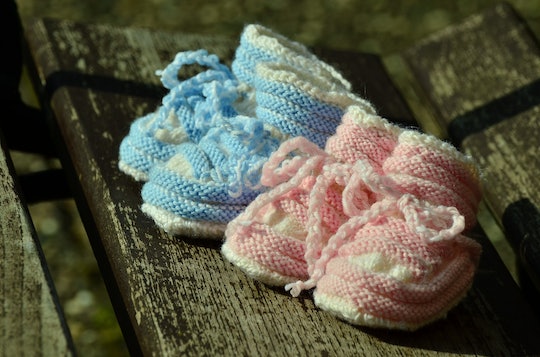 When Can You Find Out The Sex Of Your Baby? Because OMG You Need To Know RN

Though there is a growing trend of parents who choose to either not use labels or wait until birth to discover whether they have a girl or a boy, many still stick to the traditional way of finding out the gender of their baby as soon as they can. If you're eagerly counting down the days in your pregnancy, then you're probably anxious to know when can you find out the sex of your baby? At the very least, knowing if your child is male or female can help you with making decorating decisions for their nursery, and to start stockpiling all those cute outfits you're going to put them in. So how soon can your doctor determine the sex of your unborn child?

As it turns out, it's not an exact science — and I should know. When my mother was pregnant with me, her OB-GYN told her with great confidence that she was carrying a boy. They even had a name picked out (Johnathan) and plenty of blue baby clothes. So you can imagine their surprise when I popped out, a baby girl. With that slim margin of error in mind, there are still some pretty solid ways to discover your baby's sex. According to the medical experts at Baby Center, "most pregnant women find out their baby's sex during their mid-pregnancy ultrasound, between 16 and 20 weeks." The article further noted, though, that it's highly dependent on whether or not the ultrasound tech is able to see the genitals.

If you just can't stand the wait, there are other options. OB-GYN Dr. Elizabeth Pryor told Parents that, at around 16 weeks, amniocentesis — taking a sample of amniotic fluid — can screen for genetic conditions as well as your baby's sex. "This test isn't without risk, however, and isn't generally performed simply to determine the baby's sex," Pryor added.

Another test, Chorionic Villus Sampling (CVS), takes chorionic villi cells from your placenta between 10 and 13 weeks to identify possible health issues in addition to your baby's sex, as the American Pregnancy Association (APA) noted.

The major issue with both amniocentesis and CVS is that they are invasive procedures where material is being removed from your womb. This can give some expectant mothers pause, understandably. More recently, though, a new non-invasive method has become available. As NPR reported, beginning at 10 weeks, Noninvasive Prenatal Testing (NIPT), "uses a blood sample from an expectant mother to analyze bits of fetal DNA that have leaked into her bloodstream." This test is used to determine genetic disorders, such as Down syndrome, as well as the gender. Again, this approach isn't perfect either. For instance, NIPT is not regulated by the Food and Drug Administration (FDA), may not be covered by your insurance, and false positives are fairly common, as NPR further noted.

With 10 weeks being the earliest you can have either CVS or NIPT done and 16 to 20 weeks being the average time range for ultrasounds and amniocentesis, you have a gap of about six to 10 weeks between these tests. It's worth remembering, however, that none of these methods claim 100 percent accuracy in determining your baby's sex. So, if you don't mind invasive procedures and prefer to know about any possible health conditions, then amniocentesis or CVS are your best bet. If you prefer the noninvasive approach, prefer to know sooner than later, and don't mind possibly paying out of pocket, then NIPT is a probably a good fit. But, if you don't mind waiting until your second trimester, you can stick to the traditional, noninvasive, and insurance-covered method of having an ultrasound. Regardless of which method, if any, you choose, it's best to consult your doctor for which test is the best fit for you.