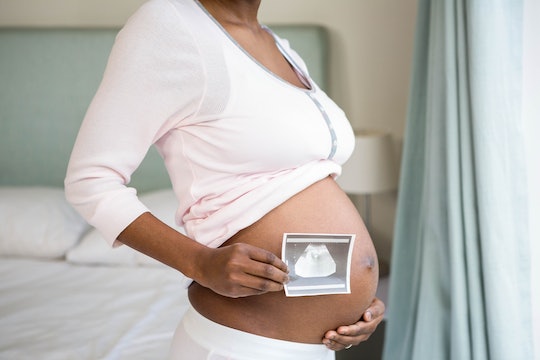 Here's When You Can Find Out The Sex Of Your Baby, If Patience Isn't Your Thing

It's not uncommon to have a lot of questions when you're pregnant. One curiosity in particular, of course, might be sex-related. While the sex of your baby shouldn't change how you parent, it could possibly maybe impact room decoration, clothes purchases (again, maybe), or even just shut up your well-meaning, curious family and friends. So, when can you find out the sex of your baby? Because even though it changes very little in terms of how you'll raise your little one (like, at all) waiting is hands down kind of the worst.

While there's s standard answer to this question, technology is advancing so the answer, essentially, depends. In the Journal of the American Medical Association, it's reported that a cell-free DNA test (a blood test) can analyze fetal DNA in the mother’s blood. It's said to search for traces of the male ‘Y’ chromosome. Though this test can be done as early as seven weeks gestation, the purpose is to find and treat those with a history of sex-related genetic disorders — not for determining the sex of the baby.

By utilizing this test, moms can forgo other invasive treatments or samplings (that run the risk of miscarriage), by knowing genetic abnormalities ahead of time. A "plus" to this blood test is the ability to know a baby's sex earlier than traditional screening methods, though it's use is questionable on ethical levels as it may lead to gender selection or abortion.

There's also some debate as to whether or not a baby's heart rate might determine the sex, although studies have since determined the opposite to true. So while, for some, it might be nice to determine the sex of their baby in the first trimester (I mean, if planning significantly ahead is really your thing) a study in the journal Fetal Diagnosis and Therapy, as reported via Healthline, found that there's no significant difference significant enough to distinguish between male and female heart rate.

Other ways to find out the sex of your baby, such as amniocentesis or chorionic villi sampling (CVS), can be performed anywhere between 10 and 20 weeks gestation, but they're more intrusive and come with risks (again, such as miscarriage). These tests are only suggested if you have a history of genetic disorders, are over 35, had a chromosomal condition in another pregnancy, or received positive results from a cell-free DNA test. Otherwise, steer clear.

If you're of the traditional mind, and don't mind waiting a few extra weeks or so, Dr. Elizabeth Pryor, MD, FACOG from American Baby, tells Parents a routine ultrasound can typically be done between 18-20 weeks of pregnancy to determine the sex of a fetus. Of course, the biggest factor is the position of the fetus at the time of the ultrasound, because sometimes babies hide or bend into positions that don't make it easy to determine what is what.

In the end, waiting is the name of the pregnancy game. Go figure.