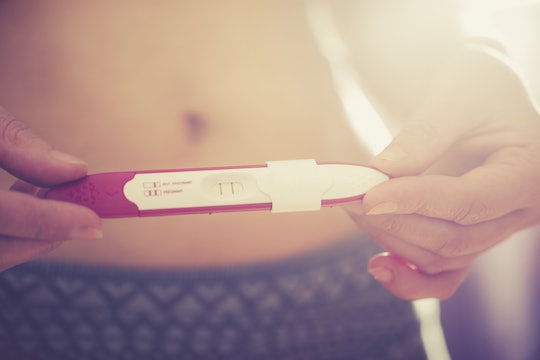 Here's When You Can Try To Conceive After A Thyroid Removal

If you've never had a problem with your thyroid, you might not even know where it is or what it does. (Quick lesson: it's in your neck.) But if you have ever had an issue with it, there's a good chance you're a female in your 20s or 30s, a group statistically at high risk for thyroid cancer. Those are the same years that many women are thinking about starting families, and a thyroid problem can throw a wrench into those plans. So when can you get pregnant after you have your thyroid removed? It'll set back you back a bit, but not as much as you may think.

OK, a quick biology lesson. The thyroid is a small, butter-fly shaped gland in your neck that produces hormones that help control your metabolism, according to Healthline. If it's not functioning properly, it can cause all sorts of problems like, weight gain, weight loss, and extreme fatigue]. If you notice a lump at the base of your neck, it could mean that thyroid cancer has developed and it may need to be removed.

According to Self, 15 percent of all new cases of thyroid cancer are diagnosed in people between the ages of 20 to 34, and women are three times more likely to get it than men. But the good news is, it's very treatable— as many as 97 percent of young people diagnosed with thyroid cancer will be completely cured, according to Endocrine Web.

There's one treatment for thyroid cancer that's very unsafe for women who are pregnant or hoping to become pregnant, however. According to a study in the Journal of Advanced Research, treatment for thyroid cancer typically involves either the partial or total removal of the thyroid, which is then often followed up with radiation treatment. Radiation treatment can be extremely harmful to a fetus, so it won't be done on a pregnant woman. According to Empower Your Health, you should wait at least six months to get pregnant after your radiation treatment ends, but preferably you'll up to a year. The treatment can also slightly raise your chances of having a miscarriage if you get pregnant within that year. The website also noted that men who've undergone radiation treatment may also want to wait before trying to father a child, because it can lower sperm count for several months.

Not everyone needs radiation treatment, however, as a thyroid removal may be enough to cure you. And even if your issue isn't diagnosed until you're already expecting, the good news is that a thyroidectomy can safely be performed on pregnant women according to researchers in Italy. You may need some extra vitamins and supplements, but there's no reason to believe you can't go on to have a happy and healthy pregnancy just because you've had your thyroid removed.