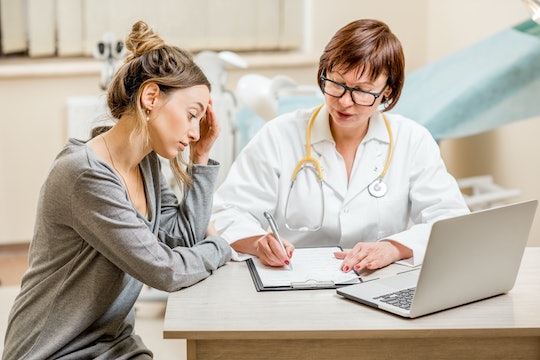 Everything You Need To Know About Getting Your Tubes Tied, According To An OB-GYN

There is no strict age requirement for having your tubes tied, but states and insurance companies might have varying requirements if you are seeking a tubal ligation at a young age, according to Dr. Nicole Scogin, OB-GYN at the All About Women Obstetrics and Gynecology Clinic in Gainesville, Florida, in an interview with Romper. "Federally funded insurances require a federal sterilization form that specifies an age of 21 to make this decision and have the cost be covered by their insurance," she says. That’s not to say that you can’t have your tubes tied at a younger age if you are paying out of pocket or going through a non-federally funded insurance plan. However, it can be difficult to get a doctor to agree to perform a tubal ligation if you are choosing to do so at a young age and before you have any children.

If you are looking to have a tubal ligation before having any children and at a young age (considered to be younger than your mid-20s by many doctors), you can technically have the procedure done but you might have difficulty convincing a doctor to do the procedure. Apparently this is due to the high rate of regret that young patients report in the years following their tubal ligation. A study on sterilization in the United States in Obstetrics and Gynecology reported that "Young age at the time of sterilization is the strongest predictor of future regret. Women under the age of 30 at the time of the procedure were twice as likely as women older than 30 to report regretting having the procedure performed."

One way to have a tubal ligation is directly after having given birth by cesarean section, within 24-48 hours of giving birth vaginally, or once you've healed for at least six weeks after either kind of delivery. Dr. Scogin, explains, "You can opt for postpartum sterilization that's done immediately postpartum during a c-section and we can tie your tubes assuming we can reach them. Or you can have postpartum sterilization that's done within the first 24-48 hours immediately following your vaginal delivery." Because the uterus is enlarged from giving birth, doctors can more easily reach the tubes using an incision underneath the umbilicus.

Tubal ligation is a procedure that is done under general anesthesia to permanently close your fallopian tubes, ensuring that you don't become pregnant because sperm is unable to meet the egg that would otherwise travel down the tube, according to Planned Parenthood. It is designed to be a permanent procedure, despite the temporary image the phrase invokes. Planned Parenthood also pointed out, "You still get your period after tubal ligation — you just can’t get pregnant."

A natural time to have a tubal ligation is directly after giving birth, but if you are opting to have your tubes tied but aren't delivering a baby in the future, you can have a tubal ligation done laparoscopically so long as you haven't given birth within the last six weeks. Dr. Scogin explains that a laparoscopic tubal ligation typically involves a single incision through the umbilicus or belly button, but can sometimes require other small incisions in order to reach the tubes.

There are various ways doctors use to actually "tie" the tubes, none of which involve tying them into neat little bows, which is the mental picture the term lends itself to. Instead, Dr. Scogin says, doctors can "burn the tubes, place clamps on the tubes , or completely remove them." The first two options usually require only one incision, whereas as removing the tubes altogether requires multiple incisions because "if you remove them you need some assistant ports."

Dr. Scogin recommends discussing with your doctor which type of tubal ligation you'd prefer based on your particular needs. "Patients with a strong family history of ovarian cancer, should sometimes opt for removing the tubes. There is a 67 [percent] decrease in the risk for ovarian cancer if you remove the tubes because of the way epithelial cancers develop."

However, if you are looking for a birth control method, Dr. Scogin suggested considering other methods, including hormonal IUDs (that can even help address other problems like painful periods or excessive bleeding) or a male vasectomy. Because tubal ligation is a permanent method, the risk for regret, especially if a patient is very young, can be high. "There are ways to reverse it but they are not often successful," said Dr. Scogin, "The risk for regret is fairly high in studies, especially in patients younger than 30, it can be as high as 25 [percent]." Alternatively, she pointed out that a "vasectomy is an in-office procedure, it doesn't take anesthesia, and the risk for regret for men is about 5 [percent], even under age 30."

Because having your tubes tied is a simpler procedure to complete when you have just given birth, it's a topic for consideration for women as they believe they are finished having children. It's also something some women consider even if they haven't had any children and don't plan to, although many women report that convincing a doctor to perform a tubal ligation on a young woman is an uphill battle.

Virginia gynecologist Yekaterina Rabkin, in a conversation with Slate, explained that she did everything in her power to only perform tubal ligations during C-sections: “Otherwise, you expose someone to surgical risk without any improvement in efficacy, a higher risk of ectopic pregnancy [due to procedural failure], and the issue of regret … I genuinely believe that a tubal ligation is not the best option for contraception for most people.”

So while it might seem like a simple procedure, there is clearly a lot of consideration that should go into your decision, especially because tubal ligation is a procedure for permanent sterilization. Dr. Scoggin explains, "The procedure is very difficult to reverse; they have to understand it's meant to be a permanent procedure. There are ways to reverse it but they are not often successful."

Whether or not you decide to get your tubes tied is, of course, your own prerogative, but it's helpful to know about the roadblocks you may face along the way.