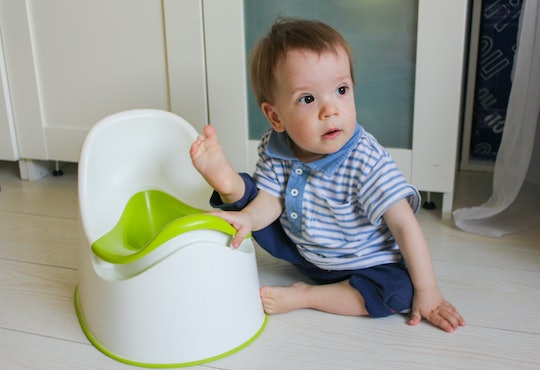 Your Boy May Not Potty Train As Quickly As Girls, So Here's How To Know If He's Ready

After potty training both a son and daughter, I can unequivocally say that our daughter was by far easier to potty train than our son. For starters, while we struggled with when to potty train a boy, the signs were much clearer with our girl. We followed the protocol of demonstrating the act, introducing a fun potty chair, and rewarding her for each "go." It felt like she did the rest of the work within an hour of realizing she didn't have to wet herself, so we were left with a bulk supply of training diapers that had nowhere to go. In fact, she earned the nickname "the toilet tourist" because once she got the hang of using a toilet, she had to sample the restrooms every place we went. It was amazing.

More Like This
Here's The Deal With Babies Who Sleep With Their Eyes Half Open
30 Vintage Photos Of Parents Giving Their Babies A Bottle
5 Signs Your Baby Is Too Cold
Um, "Rusty Pipe Syndrome" Is A Thing, & Every Breastfeeding Mom Should Know About It

Our boy, however, never seemed interested in the potty. For months it felt like we were constantly interrupting him to pop a squat on the toilet where he would sing, monologue, or daydream without anything to show for it. This went on until he was 3 years old, at which point he rebelled against being constantly pulled away from his toys and games. His Batman undies no longer held any sway and he actually moved backwards into Pull-Ups. I was worried about being able to send him to pre-school, but we gave him a break that actually became a breakthrough and he was able to enroll with the rest of his friends. Phew.

So is this the standard for all kids? While there is little scientific evidence that a boy will inevitably finish their training later than girls, the American Association of Pediatrics does note that population studies have shown that boys lag behind the female counterparts by about six months, thanks to boys' tendency to be more physically active. That same study, however, didn't find evidence that it's necessarily true in individual cases. A desire for self-mastery or to please a parent can encourage some kids to overcome physical barriers to readiness.

My main takeaway was that the finish line with each kid is individual, so starting when I was ready, rather than waiting for my son to show interest and exhibit a few milestones, was just an exercise in prolonged frustration. A few things to look out for, according to WebMD, is whether your son is aware he needs to do the deed, whether he can pull down his diaper with or without help, and whether he can stay dry for two or more hours at a time. Our son did none of these things after his second birthday when we started his training, though his sister was hiding in cabinets to get her business done around 18 months.

According to toilet training expert Jamie Glowacki, author of Oh Crap! Potty Training and a corresponding certification course, boys can be just as easily potty trained as girls, just with a different approach. On her website, Glowacki says that the frustration might just come down to gender differences. While girls are often more social and readily seek approval, boys are typically wired differently.

"It means if you have a boy and you are struggling with potty training, you might want to cut back on the talking," she writes on her website. "Your little boy may not be interested in your pride or your happiness over peeing in the potty."

Instead of loads of encouragement, praise and talking, Glowacki suggests simplifying the process down to an order of operations. A quick, step-by-step process allows him to jump back into his play instead of thinking he's going to be stuck on the toilet for awhile.

Once you start the process, however, there are a few universal things to do for training to continue moving forward. According to the American Academy of Pediatrics, a parent's approach should be positive and consistent. Additionally, the article continues, be aware of any changes in your kid's abilities or preferences so you can change course or adjust so they can keep moving toward proficiency in the bathroom.

With a lot of patience and consistency, perhaps you and your boy can even have fun potty training. There's a lot of potential for silliness once potty training starts, and when you find your little boy peeing into the shower like I did, you'll know he's on his way (and so are you) to diaper freedom.