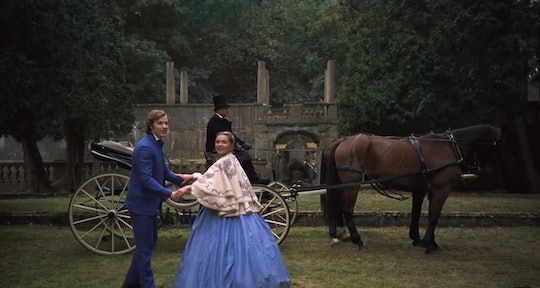 With six Oscar nominations, including Best Picture, Best Costume Design, and Best Actress in a Leading Role, Greta Gerwig's reinterpretation of Louisa May Alcott’s classic novel is a not-to-be-missed film. In fact, if you're heading into tonight's Oscars without having seen Little Women you may want to consider rectifying that as soon as possible. Or, at the very least, adding it to your watch list. But where and when can you stream Little Women before the Oscars? The truth is, the task could prove incredibly tricky until later this year.

Starring Emma Watson, Florence Pugh, Saoirse Ronan, and Eliza Scanlen as the four March sisters, Gerwig's Little Women tackles Alcott's famed coming-of-age novel through a non-chronological timeline. Stars Meryl Streep and Laura Dern round out the film's powerful female cast. The New York Times hailed the film as "an absolute gift," noting that Gerwig's storyline unfolds "as if [Alcott's] book has been carefully cut apart and reassembled ... in an order that produces sparks of surprise and occasional bouts of pleasurable dizziness."

Unlike its namesake novel, the film jumps repeatedly back and forth between the girls' present lives and their childhood, weaving stories of love, loss, and family along the way. And although The Atlantic's David Sims doesn't think Little Women will win the Oscar for Best Adapted Screenplay, it's the film he thinks ought to walk away with the prize. "Gerwig took Louisa May Alcott's beloved novel and chopped it into pieces, cutting between its two timelines with verve and energy to highlight its brilliant parallel storytelling," he recently wrote when compiling his list of predicted Oscar winners.

So, whether you've yet to see Gerwig's film or are eager to watch it at home after initially catching it in theaters, you're likely to come across some difficulties when trying to find Little Women on an on-demand streaming platform. According to Decider, Little Women isn't available to stream online just yet as it hasn't finished its theatrical run. That means those looking to see the film will have to turn to their local movie theaters — for now.

It's believed that Little Women will eventually come to Netflix — perhaps sometime in or around March 2020, according to Decider. It should be noted however that neither Netflix nor Sony Pictures have confirmed such rumors or mentioned a possible release date. However, both The Netline and Decider have said that because Sony Pictures and Netflix continue to have "a good relationship," it's likely Little Women will end up on the streaming network alongside other Sony films such as Spider-Man: Into the Spider-Verse and Spider-Man 3.

In the meantime, though, you can certainly stream the 1994 version of Little Women on Vudu, Amazon Prime, and YouTube for a few dollars.