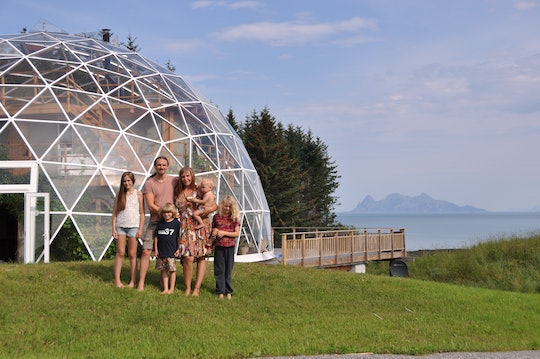 You Can Worry About Climate Change, Or You Can Build A Refuge For Your Kids

The world is burning or flooding, it’s going to get worse, and it’s all our fault. Climate change is scary enough, but knowing your kids are going to have to deal with the mess? As if regular parental guilt wasn’t enough to deal with.

More Like This
30 Vintage Photos Of Parents Giving Their Babies A Bottle
Is Your Kid Ready To Ditch The Nighttime Diaper? Look For These Signs
The Mommy Wars Of COVID
What Parents Should Know About The New CDC Mask Guidelines

“I’m terrified,” of what climate change will bring, says Jessica Williamson, a Los-Angeles-based mother of a toddler. She and her husband decided to forego buying property in the city: “Between all the wildfires, water scarcity, and scorched earth, purchasing anything long-term here feels risky,” Williamson says. Instead, she and her husband bought property in New Zealand (Williamson is a dual citizen), and the family plans to move there in a few years.

Michael D’Estries, a father of two kids under 10 in Central New York state has also made a big investment in land: he bought a 50-acre mix of forest and farm 10 years ago and thinks the location will likely protect his family from the brunt of climate-change impacts. He’s also chosen to mitigate a hefty portion of the family’s energy impact, installing a large 36-panel solar array on the roof of their barn. “From about April to November, it supplies more than 100 percent of our electric needs, with the remainder acting as a credit during the winter months,” D’Estries says.

Human beings have lived through — and reproduced during — some of history’s worst times, right? People made babies and gave birth during wars, forced migrations, and plagues, for Pete’s sake. So what’s a little temperature fluctuation got on that?

Well, climate change is different, even from war — it’s planetary. And we are different, too. For those of us who have health care access, having a child isn’t an automatic consequence of sex. We have choices, giving rise to the obvious question: If they had the choice, would war-torn parents of the past had the kids they had — or did they have them because there wasn’t really another option?

Some people are questioning having children at all, while some parents are choosing not to have a second or third child. Both reactions come from both a place of concern for the quality of life for those children, and the understanding that every additional person on the planet is using resources — resources that are dwindling and threatened by floods, fires, droughts, and other natural disasters.

All this existential anxiety feeds into the already complicated experience of parenting, a “time when we can’t avoid thinking about our mortality, because such a profound thing is happening,” says Dr. Alexandra Sacks, a reproductive psychiatrist and co-author of What No One Tells You: A Guide to Your Emotions from Pregnancy to Motherhood.

Bringing another human into the world reminds us of our own eventual death — and the heartbreaking thought that our kids are subject to the laws of nature, too. These reminders of our humanity dovetail with warnings of massive planetary change that our kids will experience in their lifetimes — and cause all kinds of difficult-to-navigate feelings.

So if climate change is freaking you out, it’s pretty understandable. But remember: “You may have more agency than you realize in participating in the human experience,” Dr. Sacks says. “If you’re concerned and feeling dread about climate change, get involved in… protecting the environment,” she says.

In short, taking action that’s realistic to your circumstances can help empower you and allay your fears somewhat — and will likely make the world better for all kids, including your own.

In the meantime, some parents are making strategic and significant decisions right now.

While he hasn’t made any big moves yet, John Smith* a legal professional with a blended family of six kids in the Austin, Texas, area, is concerned about what he calls the “marginal” water situation there. “Long-term goals include moving elsewhere, like somewhere further north with a more robust water supply,” Smith says, pondering New England.

Educating their kids is an important part of these parents’ reactions to climate-change uncertainty. “We teach them about the impact that consumption, particularly disposable consumption has on the planet, and how it affects others,” says Smith. He says he and his family eat mostly plant-based home-made meals, raise chickens for fresh eggs, and the family grows some of its own food “as time and weather permits,” all with the environment in mind, but also because it’s positive family time together. D’Estries’ family also grows their own food seasonally, have what he calls “Earth-friendly livestock like chickens,” and have planted fruit trees on their land.

Williamson tries to keep a mostly vegan home (with some frustrating compromises like her husband and daughter’s preference for cow’s milk), and she’s already explaining to her toddler where garbage really goes. She also says time in nature is paramount, via gardening and spending time at the beach with her child. “When we are disconnected from our environment, it is difficult to be in tune with the effects we’re having on it,” says Williamson. D’Estries agrees, saying, “As someone deeply concerned with humanity's efforts to seemingly divorce itself from nature, I feel good about raising my kids to weave the wild world into their hearts from the very beginning.”

If dread about the changed world climate weighs heavily on your shoulders even as you do what you can, Dr. Sacks recommends connecting with your spirituality. “That could mean art, talking circles, a therapist — look for opportunities to talk about the big things in life, rather than keeping your head in the sand,” she says. That way, “When you look up you won’t be afraid.” Keep voting, and make your voice heard, Dr. Sacks says.

“On one hand, you can’t control everything. On the other hand, as humans we can do a lot when we decide to.”

*Not his actual name.

Pictured at top: Benjamin and Ingrid Hjertefolger pictured outside their glass dome creation with their four children on July 26, 2016 in the Arctic Circle, Norway. Photograph by Benjamin Hjertefolger Barcroft / Barcroft Media via Getty Images.