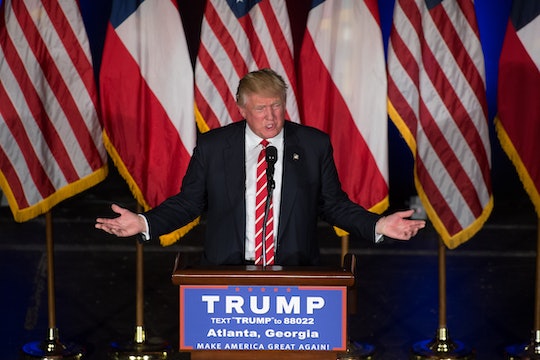 When Could A Terrorism Watch List Gun Law Go Into Effect? Not Anytime Soon

As with any mass shooting, Sunday's massacre at Pulse nightclub in Orlando has reinvigorated the debate about gun safety laws and regulation throughout the country. And while many are calling for new laws to restrict the sale of assault rifles, as well as stricter rules about who can and cannot buy guns, in general, it has seemed as though gun lobby the National Rifle Association has consistently been against moving any of these policies forward. But according to Reuters, after presumptive Republican presidential nominee Donald Trump announced on Twitter Wednesday morning that he plans on speaking to the NRA about preventing individuals on the government's "no-fly list" from owning guns, the lobby group released a statement saying it has never actually been against that, leading many to wonder if new gun laws might actually be on the horizon. When could a terrorism watch list gun law go into effect? It all depends on how you interpret the NRA's position, Trump's intentions, and what the presidential nominee is actually capable of.

In an official statement executive director of the NRA's Institute for Legislative Action Chris Cox wrote that the group has always actually been against terrorists having access to guns, writing,

The NRA's position on this issue has not changed. The NRA believes that terrorists should not be allowed to purchase or possess firearms, period. Anyone on a terror watchlist who tries to buy a gun should be thoroughly investigated by the FBI and the sale delayed while the investigation is ongoing.

What does this mean exactly? Well, possibly not a whole lot. Despite Cox's claim that the NRA has always been of the position that terrorists shouldn't be allowed to purchase guns, on Tuesday, the NRA also wrote on Twitter that laws that would prevent "people on 'watch lists'" from owning guns are "ineffective, unconstitutional, or both." Similarly, Trump himself seems to be of two minds when it comes to gun restriction, according to CNN. On the one hand, Trump has said in the past that he is against restricting gun rights and ownership (likely one of the major reasons he was able to earn a public endorsement by the NRA), but in his latest tweet, it certainly sounds as though he has changed his tune — at least when it comes to suspected terrorists.

But ultimately, even if the NRA has always believed that people on government watch lists shouldn't have access to guns, it's unlikely that it would actually support an actual restriction the way Trump appears to be suggesting. Mostly because from Trump's tweet, it sounds like he wants something more definitive than what the NRA has actually said it's in favor of, which is a delay or waiting period — not an all-out ban. As with many Republicans, the NRA believes such a restriction would infringe on the Constitutional rights of individuals, according to CNN. And in his statement, Cox specifically notes:

due process protections should be put in place that allow law-abiding Americans who are wrongly put on a watchlist to be removed.

While it seems nice to think that something might actually to done to prevent mass shootings, according to MSNBC, this certainly isn't the first time the idea of preventing individuals on watch lists from purchasing guns has been proposed. In December 2015, Republicans in the senate blocked a bill that would deny suspected terrorists the right to buy guns only one day after the mass shooting in San Bernardino. Critics pointed to the influence of the NRA as a major reason why the bill was voted down, and while the lobby group didn't comment on the decision, it did reiterate its position one month earlier when the NRA said it wanted "to ensure that Americans who are wrongly on the terrorist list are are afforded their constitutional right to due process" (sound familiar?).

It's unclear at this point what Trump thinks he will be able to do to move forward any kind of stricter regulation regarding potential terrorists and gun ownership, especially since the NRA has made its position fairly clear a number of times. It's also still left to be seen if Trump actually does mean that he wants to make gun ownership tougher, after he has said in the past that he is pro-gun.

Either way, one thing is certain: the debate about gun safety is one that is not likely to be solved easily any time soon, and yet, it is also clearly a pressing issue that needs to be taken seriously. Now that 49 people lost their lives at the hands of one armed gunman, some kind of action to make mass shootings less likely seems more than overdue.