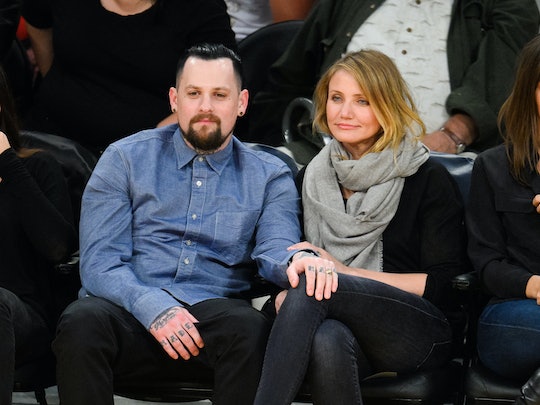 In a sweet post on Instagram, Cameron Diaz revealed she secretly welcomed a daughter with her other half, Benji Madden. As fans of the Charlie's Angels actress celebrate her big news, now seems as good a time as any to take a walk down memory lane. For example, when exactly did Diaz meet her husband?

Diaz announced on Friday that she is officially a mom. "Happy New Year from the Maddens!" she wrote on Instagram. "We are so happy, blessed and grateful to begin this new decade by announcing the birth of our daughter, Raddix Madden. She has instantly captured our hearts and completed our family."

Although Diaz explained they are "overjoyed" to share the news of their daughter's birth, they also "feel a strong instinct to protect" baby Raddix's privacy. It's for that reason Diaz, 47, and Madden, 40, have decided not to post any photos of their newborn daughter, or share any more details about her "other than the fact that she is really really cute." The new mama also disabled the comments on her birth announcement post.

Casual fans of Diaz, however, might have found themselves thinking, "Wait, what?! I didn't even know she was married!" Which is completely fair, considering the actress has made it a point to keep her relationship with Madden pretty private. Although Diaz has had high-profile relationships with people like Justin Timberlake and Alex Rodriguez in the past, it seems she's deliberately done things differently with Madden.

The pair actually met back in May 2014, according to Us Weekly. But it wasn't until two years later that Diaz opened up about how she met the musician. She had apparently seen him around and thought he was "hot," as Diaz told SiriusXM in April 2016. They didn't officially meet until Madden's twin brother, Joel, invited him to Diaz's house for a barbecue.

"I knew Nicole (Richie) and Joel for a couple years before I met Benji," Diaz told Andy Cohen during the promotional stop for her book titled, The Longevity Book. "They were over for a barbecue and Joel said, 'Hey, can my brother come over?’ And I said, 'Of course, this is family.' And then (Benji) walked in the door and I was like, ‘You!'"

Diaz and Madden went on to tie the knot on Jan. 5, 2015, according to E! News. But it was so low-key that the marriage barely registered in the celebrity news world. Not that it hasn't totally rocked Diaz's world in the best way. “[Marriage] was the biggest thing I’ve done in my 40s, and it opened me up in different ways,” Diaz told Harper’s Bazaar in May 2016. “It’s pretty awesome. I didn’t think it was something I’d do, and I don’t know if I’d have done it if I hadn’t met my husband. It was a surprise.”

It sounds like Cameron Diaz found herself a keeper. I wish her and her husband the best as they embark on this new chapter of their lives together. And even though the actress has decided not to post photos of baby Raddix, I hope she ends up sharing a few parenting anecdotes with fans. Because I have a feeling she's going to totally rock it.