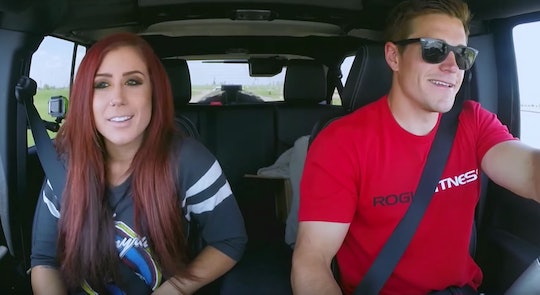 Chelsea Houska & Cole DeBoer Had Two Weddings For *This* Reason

Teen Mom 2's Chelsea Houska and Cole DeBoer did a lot of celebrating this week when they welcomed their second child together, a baby girl named Layne Ettie, on the same day as Houska's birthday. But fans unaware of the couple's journey to parents of three might be wondering how it even began. And fans just now tuning in to Teen Mom 2 might be wondering — when did Chelsea Houska and Cole DeBoer get married?

Layne's birth on Wednesday, Aug. 29, marked the third addition in to Houska and DeBoer's family. Their son, Watson Cole, was born almost two years ago on Jan. 25 2017, according to People. Houska had given birth to her daughter, Aubree Skye, in 2009, and she shares her with ex-boyfriend, Adam Lind, according to Baby Gaga. Although their lives as parents is super exciting — and episodes of Teen Mom 2 capture all of this joy and happiness — it's natural for fans to be curious about the couple themselves and their timeline to marriage.

So, of course it made sense for Houska and DeBoer to have the wedding of their dreams a year later, having a very fun celebration with their friends, according to Brides.

Just months after Houska gave birth to Watson, Houska and DeBoer got married for the second time on Oct. 10, 2017 — almost exactly one year after they first got married, according to People. In this second celebration, the couple was able to celebrate with all of their family members and friends, which was the way they had originally planned on marrying, according to Brides. However, they decided to wait for their son to be born, first, before they decided to have their big party.

This makes a lot of sense — if Houska and DeBoer wanted to have the wedding of their dreams, then it's only right for them to have it. And the fact that they were able to celebrate it with their kids is so special. In both of their weddings, Houska and DeBoer looked so beautiful and so in love.

Seriously, Houska looked absolutely stunning in both of her wedding ceremonies. If I looked that great in a white dress, I would find any excuse to wear one.

Their journey to the altar was just as special. Houska first met DeBoer at a gas station of all places in 2014, according to Us Weekly. In July 2015, Houska told Us Weekly all about the moment they locked eyes:

He was across at the other pump. And I looked, and he was staring at me. We didn't even talk. We just kept looking at each other because we're both shy. And then we were passing each other when we left because we both lived out the same way.

Although they never said "Hi" to each other, Houska went home and told a friend that she saw the "boy she was going to marry." It's a good thing that, a few days later, DeBoer reached out to Houska on social media, according to Us Weekly — and the rest was history.

"Honestly, there's just no one that I've met that's so respectful and just nice and I trust him, which is a big deal, because it's hard for me to trust people or guys, mostly," Houska told Us Weekly.

By November 2015, the couple was officially engaged, according to Us Weekly, and in July 2016, Houska announced she was pregnant with her second child, according to Entertainment Tonight.

Of course, serious Teen Mom 2 fans have seen this all play out on camera over the past few years. And given that super exciting things just keep on happening in their lives, fans will definitely continue to see their love story play out for Teen Mom 2 cameras. Their (two) weddings were just the beginning of a very exciting lifetime together.