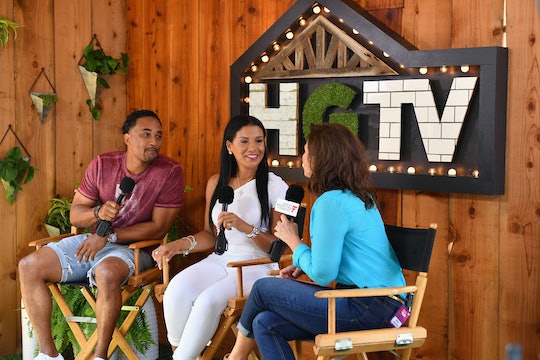 DeRon Jenkins and Page Turner seem to get along pretty dang well as co-hosts of HGTV's Flip Or Flop Nashville. For that reason, fans are a bit confused as to why the two aren't a couple anymore. The two dated for about five years before parting ways, and managed to successfully turn their romantic partnership into a professional one. So, why did DeRon Jenkins and Page Turner break up?

As DeRon and Page shared when Flip or Flop Nashville first started in early 2018, they have known each other for more than a decade, and they dated for about five years out of that time.

The former couple has been very open about the fact that they used to date, and they've both shared a few tidbits about their breakup. In the first episode of the series, Page buys a house with the intention of flipping it, but doesn't tell DeRon about the purchase until after it's all said and done. “I can’t believe Page bought this house without telling me,” DeRon said on the show, as per HGTV. “That’s probably why we broke up!” he joked.

“We work off of each other really well,” Page told HGTV for the same article. “I know exactly what makes him tick, he knows exactly what makes me tick and we get all the work done.” But, as anyone who has ever been in a relationship knows, that means they also know how to get on each other's nerves. “We also know what pushes each other’s buttons,” DeRon added. It seems like the hosts now use that to their advantage, but perhaps when they were dating, they used it as ammunition.

Still, Page has made it clear that she and DeRon had an amicable breakup, without any games. "We dated for a long time, but we still remained friends. So that’s I think the big difference. We didn’t have this huge blow up where we just stopped speaking and all that drama," she told Us Weekly in January 2018. “There was a little separation. We needed a break for a couple years. Then we were like ‘All right – we good.’”

In an interview with People TV, Page referred to their split as a "traumatic breakup," and joked that she has "stoooooories" about their relationship. "Are there every really any good breakups?" DeRon said to the hosts. When the hosts asked DeRon and Page if their relationship ever dips back into romantic vibes, they both replied in unison: "No."

So, what is the secret to DeRon and Page's success as lovers-turned-business partners? Based on the way they talk about each other, it would seem to be mutual respect. “Page is amazing at finding the right house," DeRon told HGTV in an interview. "She’s really great at doing her research and finding out the price point of the purchase and estimating what we are going to have to put into the house [to] produce a great profit.”

The Flip Or Flop Nashville co-hosts also explained to HGTV that they make sure to keep their business dealings professional — but with a dose of fun. “We do run a business, so it’s a serious business, and we have to make sure we realize a profit at the end of it all,” Page said. “But we also know that it’s fun.” DeRon agreed with his co-host. “Yeah, we definitely have fun on our job sites,” DeRon concurred. “’Fun work’ is what I try to call it.”

So basically, if you're trying to get over a traumatic breakup, you should probably call your ex and ask if they want to go into business together. No, on second thought, you should just tune into Flip Or Flop Nashville, Thursdays at 9 p.m. on HGTV.

More Like This
Kourtney Kardashian Was Really Upset Her Kids Weren’t Invited To Her Proposal
Prince Harry & Meghan Markle Could Take Us Inside Their Home For A New Docuseries
Bridgerton Season 3 Will Focus On Fan Favorites Penelope & Colin
Our Fav Funny Couple Melissa McCarthy & Ben Falcone Created A Weird, New Comedy Series