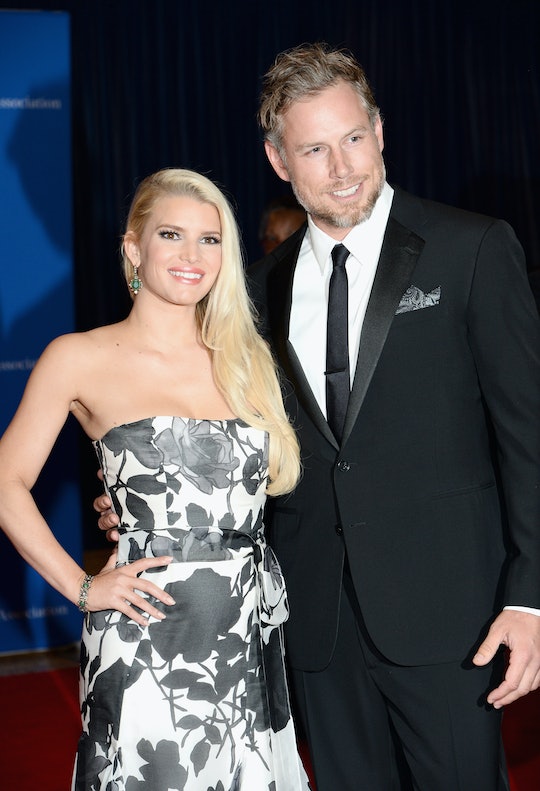 Jessica Simpson may have been an open book during her short-lived marriage to Nick Lachey. But when it came to her love life after their divorce, she preferred to keep things a bit more private. At least at first, that is. Because the Jessica Simpson her fans know and love (the one who tends to get a little TMI about her sex life and bodily functions) resurfaced once again. Now that she's married with three children, people might have wondered: When did Jessica Simpson and Eric Johnson get married?

But first, I'll give you a rundown of the "Take My Breath Away" singer's relationship timeline before her life with the retired professional football player. Simpson's first marriage to 98 Degrees singer, Nick Lachey, lasted less than four years — from October 2002 to June 2004, according to Cheat Sheet. After that, she dated other high-profile celebrities including John Mayer and football star Tony Romo. It wasn't until May 2010 that Simpson and Johnson met through friends, according to E! News. He was still in the midst of divorce proceedings at the time, but once the divorce was finalized, Johnson and Simpson were engaged just a month later in November 2010.

Judging by how quickly the former football player put a ring on it, you'd think he and Simpson would have had a quick turnaround between their engagement and wedding. But that's not how it ended up playing out.

In October 2011, Simpson confirmed that she and Johnson were expecting their first child, Reuters reported. Their daughter, Maxwell Drew Johnson was born the following spring on May 1. By the end of 2012, it was revealed that baby number two was on the way.

"We're doing it very backwards, I know...I'll just keep my legs crossed, I guess, this time," Simpson hilariously told Jay Leno during an appearance on The Tonight Show in January 2013, according to She Knows. Evidently, the couple had already set the date two different times, "but he keeps knocking me up!" she explained. Simpson added:

Apparently it was a part of God's plan for my life. I was extremely shocked...because I was going through a lot of hormonal changes, trying to get back to the old, vibrant Jessica. You know, it was kind of like a one-night stand. And it happened, all over again!

This time, Johnson and Simpson welcomed a baby boy named Ace Knute Johnson on June 30, 2012, according to USA Today.

After having two children back-to-back, Simpson and Johnson took a break from welcoming any more children. They were finally able to tie the knot on July 5, 2014. The wedding was held at San Ysidro Ranch in Montecito, California, E! News reported, and cost a cool $1.4 million. Maxwell was their flower girl and Ace served as the ring bearer. Aww.

In July 2018, Simpson opened up about her marriage to Johnson and what he's like as a dad. "He keeps me hot," she told Entertainment Tonight, also sharing that her husband is an incredibly involved parent. "He's always throwing around the kids, and he's just an amazing father, it makes me want to stay young... Like how can you be so active? I mean watching the kids running makes me exhausted."

Simpson and Johnson went on to welcome their third child — a daughter named Birdie Mae — in March 2019.

So there you have it! Jessica Simpson and Eric Johnson tied the knot on July 5, 2014, which means they've been husband and wife for just over five years now. With three adorable kiddos, their hearts — and arms — are definitely full these days.