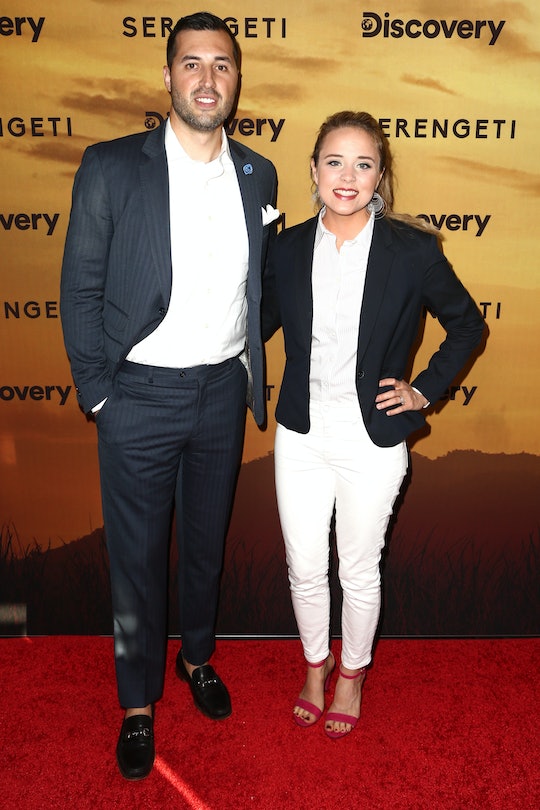 Duggar family engagements can be tough to keep track of because of the family's large size, which is why some fans might not remember when Jinger Duggar got engaged to Jeremy Vuolo, her beloved husband. Their love story unfolded very quickly, after all, and it's reasonable some Counting On diehards want a refresher on their relationship timeline. Spoiler alert: Some might be surprised by the length of time between their courtship and official engagement.

Jinger and Vuolo began courting — a Duggar term for dating — in June 2016 after meeting in May of that year, according to People. Their courtship was a brief one compared to other members of the famous family because they got engaged one month later in July 2016, as the outlet noted. In a joint statement to People, the couple expressed gratitude towards their fans, most of whom were thrilled to learn about their impending walk down the aisle.

"So excited to share this news that we are now engaged," the couple said at the time. "From both of us, thank you for the countless well-wishes we've received during the courtship. We are so excited to take this next step in spending our lives together. We are so grateful for how the Lord has brought us together. It has been an incredible journey so far and we are excited about serving Christ together in the coming days."

Although they only courted for about a month, the couple took their time heading down the aisle — well, sort of. The pair married in November 2016, about four months after their engagement, according to their personal blog, with Jinger and Vuolo sharing photos and details from their big day with fans.

The Duggar daughter wore a modest gown designed by Renee Miller, according to Brides. The dress featured lace sleeves that came to Jinger's elbow and a long train, per the couple's request. Miller opened up about the train on the Duggar family blog, revealing its significance to Jinger and Vuolo.

"Both Jinger and Jeremy desired for the dress to have what I call a 'train fit for royalty,' based on a Bible verse that Jeremy had quoted his wife-to-be," Miller said. And the verse in question reads, "I saw the Lord sitting on a throne, high and lifted up, and the train of His robe filled the temple."

Miller added, "When Jinger tried on the three protocol dresses, she always looked at the train before the looked at the front, so I knew that was her heart. I wanted the train to be the center of attention."

Jinger and Vuolo were married on Nov. 5, 2016 at the Cathedral of the Ozarks at Arkansas' John Brown University, and the wedding was filmed for Counting On on TLC. After the wedding, Jinger moved to Laredo, Texas to be with her husband, and lived their for several years before they announced their move to Los Angeles. The relocation occurred right before the couple's daughter, Felicity, turned 1.

"In recent days, God has made it overwhelmingly clear to us that he is leading us out of Laredo," the couple said in a statement to the network regarding their move.

They continued, "Through much prayer and counsel, the next step for our family is to relocate to Los Angeles to attend Grace Community Church as Jeremy pursues graduate studies at The Master's Seminary. As excited as we are to begin this new adventure, leaving Laredo this July will be one of the hardest things we've ever done; our friends here have become like family. Please pray for us as we open this new chapter of our lives."

Jinger and Vuolo's courtship and engagement might have been a whirlwind, but the couple has come so far since then. They've married, had a daughter together, and made a huge move across the country. It appears things for the pair are going great, and fans couldn't be happier for them.

More Like This
Jennifer Lopez Shared A Super Romantic Video Of Ben Affleck To Celebrate Father’s Day
You’ve Probably Been Pronouncing “Lilibet” All Wrong
Catherine Reitman Calls It Like She Sees It: “Being A Working Mother Is Impossible”
10 Ways Prince George & Prince Louis Are So Different From Each Other