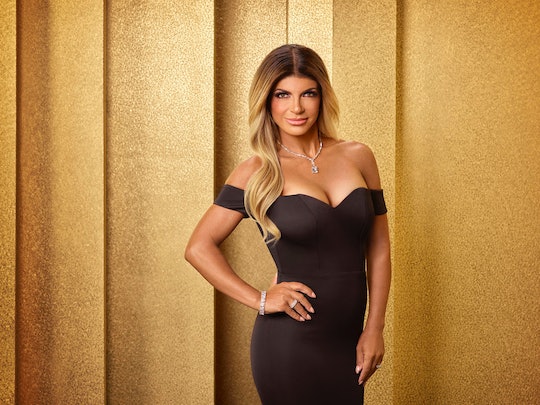 Joe & Teresa Have Dealt With Cheating Rumors On 'RHONJ' For Years

Even though Joe and Teresa have been physically separated for several years on The Real Housewives of New Jersey due to his prison sentence, he's still a regular topic of conversation. Throughout the past few seasons, Teresa has struggled with him being away, as well as rumors of infidelity. But when did Joe Giudice cheat on Teresa?

Apparently, never. There was a 2012 episode in which Joe stepped away from the group to take a "work" conversation that ended with Teresa interrupting while Joe muttered to the caller, "Here comes my b***h wife." Viewers thought it was a strange and suspicious moment that could have indicated all was not right in the Giudice marriage, but both Joe and Teresa have denied any cheating allegations. In 2015, rumors swirled about Joe cheating while Teresa was in jail, but he told Us Weekly that nothing happened between him and the woman in question, Jamie Jackson.

Others have come out to dispute the rumors as well. In 2015, Teresa and Joe's daughter Gia vaguely commented on the allegations about Joe and Jackson. She tweeted that it was "honestly hilarious how people go out of their way to make my family looks [sic] bad," dismissing the story with a laughing-crying emoji. And just a few years later in 2017, Danielle Staub came to the defense of her new pal Teresa when she was the one being accused of being unfaithful.

While speaking to Too Fab, Danielle said, "It is absolutely 100 percent not true, and it is unacceptable to even suggest it." She felt people should stay out of Joe and Teresa's marriage and stop speculating, especially since she'd seen the affection between the two of them firsthand. "You can see that they are madly in love with each other," she concluded.

Teresa responded more explosively on RHONJ when Kim DePaola claimed she'd been seeing other people while Joe was behind bars. After announcing that she was "fuming," Teresa called Kim D by a less than pleasant name, threw a glass, and declared that what Kim said was not true. Siggy Flicker stepped in to defend both Teresa and Joe, stating, "He's not cheating and there's no proof of it."

It seems everyone connected to the Giudice family has denied any and all cheating rumors. Though they pop up regularly on the show and online, both Joe and Teresa have denied that they're true. Since there isn't any real evidence to support it and no confirmation from the people involved, all one can do is take them at their word.

Though cheating may not have been one of the issues in their marriage, the Giudices will have to deal with some changes after Joe's release from prison. CNN reported that Joe would be deported to Italy after his 2019 release because he's not a U.S. citizen, which is something the family will have to navigate going forward. Their marriage will continue to be a topic of discussion on RHONJ, but not necessarily because of infidelity.