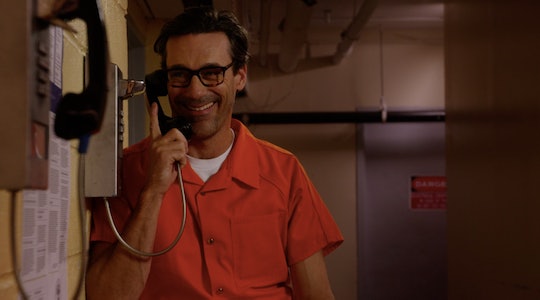 When Did Kimmy & The Reverend Get Married On 'Unbreakable Kimmy Schmidt'? It's A Mystery

It's a huge shocker when Kimmy gets the phone call from the Reverend in the final moments of the season. Here she is, just trying to enjoy her Thanksgiving dinner with Jacqueline, Lillian, "Robertina Durst", and a computerized version of Titus when her phone rings. On the other side of the call is the Reverend, played by Hamm, and he tells Kimmy that met someone. For a second, I thought he was going to say he was being released, but luckily, there is some justice in the Kimmy Schmidt world. Instead, he says that because he met someone, he's going to need to get a divorce from Kimmy. I will let Kimmy's face explain how we all looked at that moment in time.

So, when did these two get married? Well, we don't know that yet, but we can assume that something happened when the Reverend had Kimmy (and the other women) held captive in the bunker. Chances are he tricked naive Kimmy into signing something that said they were married, it just seems very on-brand for him.

We probably won't know exactly what happened until Season 3, but it is definitely a great set-up for what is to come. Let's hope that with the help of her friends (and Jacqueline's new lawyer boyfriend) that Kimmy can get out of the marriage easily. She's come so far! She may always be an Indiana Mole Woman, but maybe she can be an Indiana Mole Woman plus some.