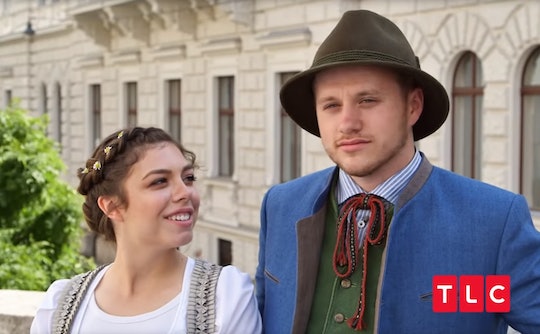 It seems like just yesterday that a certain Duggar couple tied the knot, but Lauren and Josiah Duggar are actually already celebrating their first wedding anniversary. On June 30, the Counting On stars took to Instagram and paid tribute to their special relationship milestone with some adorable and romantic photos. While we know they've been a married couple for 12 months, it's fair to wonder when Lauren and Josiah met each other and started their love story.

I know that Instagram isn’t real life, but I admit I fall prey to social media envy sometimes. Looking at the photos of their first anniversary date was one such moment, as it was a picture-perfect setup of simple romance. That’s exactly how they saw it — captioning the series of picnic moments, "Simple... but romantic."

The Instagram post showed a dinner of steak, potatoes, and broccoli set up on a wooden pallet surrounded by pillows in a lush, green field. Flowers, candles, and a framed photo made the moment look special but relaxed, and each of the pair posed for a pic of their own.

The couple definitely celebrated their one-year wedding anniversary in style, but they’ve been connected for a long, long time.

Josiah and Lauren revealed their courtship in January 2018 during a family to trip to New Zealand that Lauren joined, according to E! News. Josiah, who had his own Instagram account at the time, posted a photo series with Lauren and wrote, "I’m really enjoying the beauty in New Zealand. Oh, and the landscape is pretty nice too I guess. #mygirl #lauren."

Josiah followed up that sweet post with a statement to People, which noted that Lauren has been a family friend for many years. She even showed up during an episode of 19 Kids and Counting when it was still on the air. “We are overjoyed to begin this new phase of our lives together. Through the years our families’ friendship has allowed us to get to know one another as friends,” Josiah shared in a statement to People at the time. “It’s truly an exciting time for us, as we take this big step in establishing a relationship, getting to know one another even better and praying toward our future.”

Like many of the Duggars, Josiah and Lauren revealed they were expecting a baby within a few months after their wedding. Sadly, their first pregnancy ended in miscarriage in October 2018, according to PopCulture.

Then on May 20, the happy announced they're expecting their rainbow baby and just one month later revealed that it is a girl, Us Weekly reported. "If she only knew how loved she is already and how many people are already praying for her!" the couple told Us Weekly. "She truly is a gift…a miracle from God."

Romance seems to be a priority for these still-newlyweds. Just last month, on June 10, they chronicled a day date that Josiah organized which included another picnic, a visit to strawberry fields, and a drive-in movie, according to In Touch Weekly. On their Instagram Story, Lauren wrote, “We had such a fun and special #dateday! Honey, you’re so thoughtful – best part was being with you.”

As this happy couple and parents-to-be, Counting On fans surely can't wait to watch their relationship continue to go once their baby girl arrives.