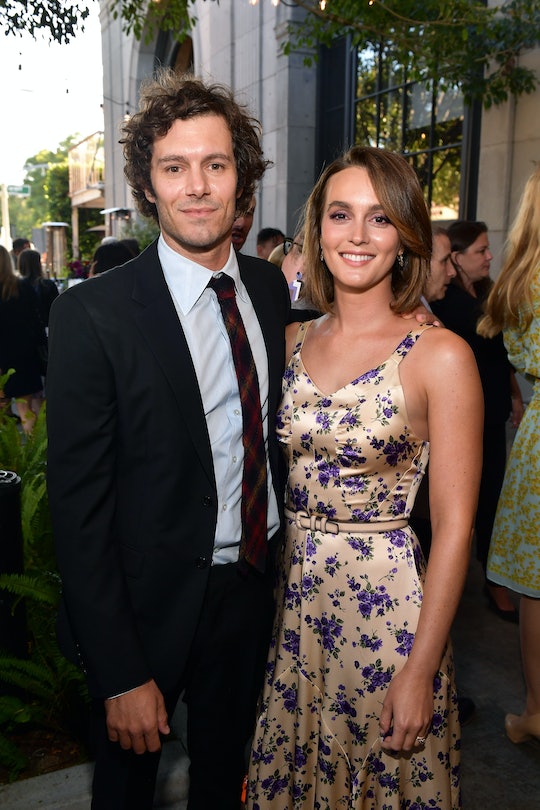 When it comes to relationships in Hollywood, I'm a tad more interested in the quieter celeb couples. A duo that fits this bill perfectly is Leighton Meester and Adam Brody, of Gossip Girl and The O.C. fame, respectively. Although the couple has been together for a while and has a daughter together, you don't often see them on the cover of magazines or social media. And given their penchant for privacy, some fans might not know when Leighton Meester and Adam Brody get married.

Meester and Brody first met back in 2011 on the set of the movie The Oranges, Us Weekly reported. The pair fell madly love, as sources told the outlet, and they tied the knot in a February 2014 ceremony in Northern California. No photos of the nuptials have surfaced, a tidbit that seems to align with their privacy-driven values.

Following the couple's 2014 ceremony, the two welcomed their daughter, Arlo, in September, 2015. The two haven't shared any photos of the little girl to date, and they're not big into social media.

No, TV's former Blair Waldorf and Seth Cohen are hard to track, actually. Meester's Instagram account mostly documents her side career as a singer and her work with the charity, Feeding America. As for Brody, he doesn't have a Twitter or Instagram account.

In fact, Brody told BuzzFeed News in August that he was grateful he shot to fame before an online social network had even been invented.

“There wasn’t the same level of interaction and contact that there is today, even if most of it is digitally,” the actor said. “It’d be a whole different ballgame. And I wouldn’t want that exposure or that power." The actor also noted that, while The OC was catching fire with fans, he was still able to anonymously go to a bar after work.

But keeping a low-key personal profile doesn't mean this couple is living in a cave somewhere. Brody has a new film, Ready or Not, as well as other projects in the works. Meester's TV show, Single Parents, lets her explore her comedic side and she also has a big-screen drama coming up.

Of course, this doesn't mean the couple can't acknowledge one another on social media from time to time. Meester gave a shoutout to her other half in an Aug. 22 post, captioning a rare red carpet appearance with Brody, "Me and my hero." The actor Meester also revealed a few hints of her private life to Shape magazine, noting, "I feel that I am really lucky, and yet, still, I stepped into the hardest job in the world: being a mom."

Meanwhile, Brody also opened up a little to Glamour, revealing that the most romantic thing he has ever done involved Meester. "It wasn’t so much the way in which I did it, but my wife and I got married quickly," he said. "We got engaged and married quickly, and that in itself felt very romantic."

As much as I would love these two to share one pic of little Arlo and their private life, I don't want them to because I respect their privacy. Although it can be fun to see the candids of famous people's kids, there is something very special about keeping your private life private. And when Meester and Brody celebrate their sixth anniversary this coming February, I have a feeling they'll keep the special milestone all to themselves.