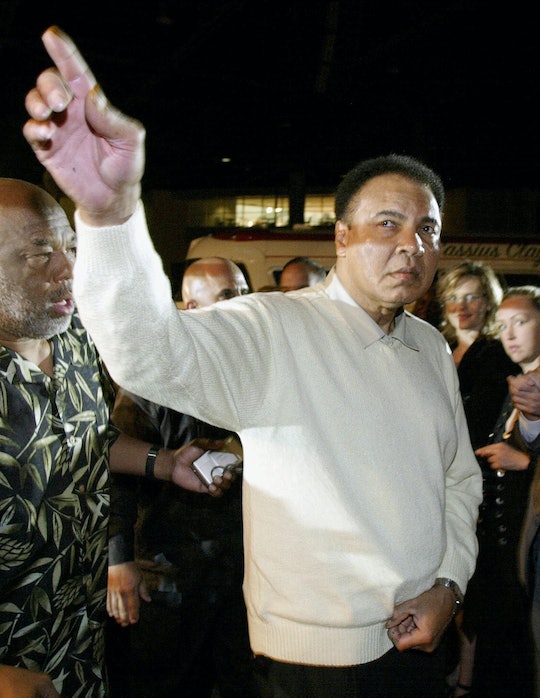 When Did Muhammad Ali Convert To Islam?

As the world mourns the death of 74-year old Muhammad Ali on Friday, it's especially important to remember that he wasn't just an American athlete. He was a pretty radical, black, Muslim American athlete. I would like to live in a world where adjectives like that didn't matter, but we just don't. He didn't pull punches in the ring (I'm not a boxing fan, maybe he did as part of his technique, but let's roll with this), and he didn't hold anything back outside of it either, in his public life. Muhammad Ali converted to Islam in 1965, joining the Nation of Islam and changing his name from Cassius Clay to Muhammad Ali. He won an Olympic Gold medal in 1960. And after his legendary fight with Sonny Liston in 1964, just two days later, he converted to Islam and changed his name.

More Like This
Bindi Irwin Has Been Sharing The Cutest Photos Of Her Daughter
Tweens Will Be Obsessed With These 20 Podcasts
The Bates Family Keeps On Growing: Get To Know All 19 Kids Here
Lisa Kudrow’s Son Used To Say "Mommy!" When He Saw Jennifer Aniston On TV

In 1966, he was stripped of his Olympic gold medals and deemed an outcast in the pool of American opinion because he refused to fight in the Vietnam war. He said that he had "no quarrel with the Viet Cong," and referenced the racial tensions raging at the time in the states and Jim Crow laws as one of his main reasons.

According to The New Yorker, Ali's career took a major hit at the time. Major sports columnists refused to call him by his taken name and continued to call him by his new name. "I pity Clay and abhor what he represents,” a columnist said. Another called him an "unwashed punk," who refused to fight in the war, totally missing the point that Ali was standing up not just for himself, for all black Americans at the time.

Could you imagine if we stripped Caitlyn Jenner of her Olympic medals? She's on the cover of Sports Illustrated this week. (Unless Ali supersedes her given his sudden death.) Even Siri will correct you if you don't use her new name. With all due respect to Jenner, boxing is a heck of a lot cooler than the decathlon for most of America and probably had more attention at the time — like soccer to the NFL — so there was more attention on the boxer. And Ali was much more outspoken (and not conservative) when it came to his politics. But I think it's a worthwhile comparison to consider.

Ali's medal's were eventually restored to him and his career carried on, eventually. But he never stopped practicing his faith, though he did break from the Nation of Islam specifically. He also never stopped criticizing American policy when he felt it was discriminatory. Loudly. Most recently, he took aim at Donald Trump, the presumptive Republican nominee for president. The Greatest (not Trump), used the real estate mogul's beef with "political correctness" against him:

Speaking as someone who has never been accused of political correctness, I believe that our political leaders should use their position to bring understanding about the religion of Islam and clarify that these misguided murderers have perverted people's views on what Islam really is.

Muhammad Ali was as American as anyone can get. Sure, sports are great. But having the freedom to say what you mean, stand up for what you believe, and take the consequences, is what democracy should be all about. The only problem? We seem to brush past how he made his way back into the spotlight of celebrity and he had to fight to get back into everyday Americans' hearts in the first place.

It seems to me, though I'm definitely too young to remember the hey days of his career, at least, that his radicalism is a little white-washed in the tributes to him in the past few days. Of course, no person is just their religion or their politics, but it's interesting to see who mourns Ali and imagine what he might think of the applause from certain individuals.

People like Donald Trump are mourning Ali. Trump, who has suggested building walls to prevent Mexicans from entering the country and booting Muslims from getting through customs at our airports, has tweeted about their respect for the boxer all while bashing President Obama for honoring Muslim athletes once upon a time. It's totally OK if you don't agree with Muhammad Ali's politics or religion, but think about them the next time you like an Instagram tribute to him. His patriotism is part of his legacy, too.