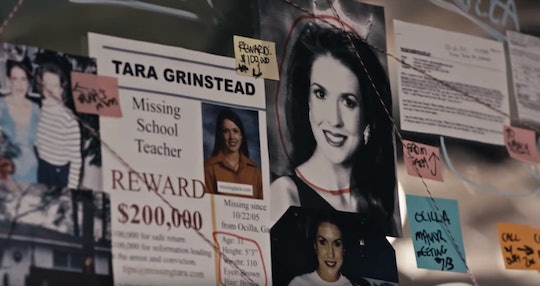 When Payne Lindsey’s podcast Up and Vanished aired in 2017, it brought Tara Grinstead’s cold case back into the spotlight. Since then, Lindsey has been revisiting her case, and he’ll be bringing viewers new information in his upcoming Up and Vanished TV special on Oxygen. If you aren’t familiar with the case, you are probably wondering how it all began. So when did Tara Grinstead go missing and what were the circumstances of her disappearance?

Tara Grinstead was last seen on Saturday, Oct. 22, 2005 in her hometown of Ocilla, GA, reported CBS News. And when she failed to show up work on Monday, Oct. 24, 2005, her family and friends called the police to report her disappearance. Grinstead was an 11th-grade history teacher at Irwin County High School, and as a former beauty queen, she coached young pageant contestants part-time. On the last day she was seen, Grinstead spent the day coaching Miss Sweet Potato contestants, and then spend the evening at a cookout. She was expected to return to the high school on Monday morning to teach her classes, but never showed up.

According to Rolling Stone, when Grinstead went missing, investigators searched her residence and found her doors locked, her car in the driveway, with her cell phone inside the house. The only things missing were her keys and purse, and the only evidence of foul play was a broken clock lamp in her bedroom and a latex glove found in her yard. Search parties and private investigators searched for Grinstead, and a $100,00 reward was offered, but there were no leads in the case. She was declared legally dead in 2010 by a probate judge, and the explanation of her disappearance remained a mystery.

The Up and Vanished podcast aired 11 years after Grinstead’s disappearance, and Lindsey used the platform to find any viable leads. When talking to Cosmopolitan UK, Lindsey revealed that he went back to Ocilla and began talking to people connected to Grinstead, but many of them were uncomfortable at first. As the podcast began to air, Lindsey said that more people opened up, and her case gained renewed steam. “The podcast created an environment in this small Georgia town that was almost like a pressure-cooker,” he told the outlet. “Everyone around you was talking about the case openly for the first time ever, so if you were someone who was walking around with a dark secret, it became very difficult to keep that secret. Certainly people were feeling the pressure — that created this fear in people who knew what happened, and I think that’s what ultimately led to the tip coming forward.”

Soon after the podcast aired, Rolling Stone reported that someone called the police with a tip which led to the arrest of 30-year-old Ryan Alexander Duke, a former Irwin County High School student. Duke was charged with the murder of Grinstead, alongside charges of burglary, aggravated assault, and concealment of a body. When asked about his podcast’s role in solving Grinstead’s murder, Lindsey told Cosmopolitan UK that he was just happy to bring her family closure and was inspired by the real-life difference he made. “Not knowing is really painful, and I think that’s what Tara’s family and these locals needed - just to know what happened so they could move on and heal,” said Lindsey. “To think that I almost just never did this at one point, and for this to have made any difference at all in real life, is just completely insane to me, but I’m just really inspired in the idea that people can make a difference.”

Since the podcast aired, Lindsey has continued to revisit Grinstead’s case, and his new TV special will feature new footage and interviews. Whether you are an Up and Vanished fan or just a new sleuth to the case, the special should provide some fresh insight into what happened to Grinstead all those years ago.