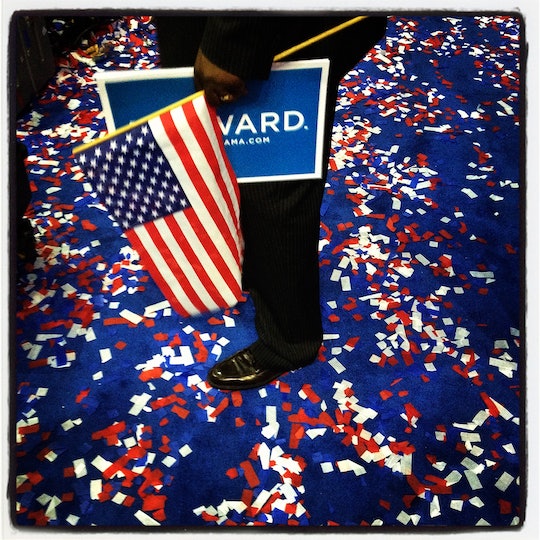 When Did The Conventions Start? They Have A Long History

Next week, the Republican convention kicks off in Cleveland and the week after, the Democrats will take over Philadelphia to vote for their presidential nominee. There's a pretty festive atmosphere surrounding the upcoming conventions this year, so when did the conventions start in the first place? They've been around for pretty much ever and they used to be a hell of a lot more interesting than they are now. The first Democratic convention was held in 1832 and the Republicans followed suit more than a decade later, by holding their first convention in 1856.

So we've been doing this for a long. The conventions were a little more organic back in the day, where anything could have happened. They still got together to nominate a candidate, pick a running mate, and solidify the party platform, but there was a little more wiggle room when it came to taking votes. For example, according to History.com, in 1844 James Polk went to the Democratic convention expecting to be a vice presidential candidate. But he was all about annexing Texas and with a little schmoozing from former president Andrew Jackson, was nominated to be president – and then he won. There was a lot more drama.

In 1924, fights broke out among the delegates at the Democratic convention in New York City's Madison Square Garden even before any vote was cast or the platform was agreed upon. All of that unexpected action is what makes politics fun. And even though now both of the conventions are run by the two parties and a little watered down — since the parties and delegates pretty much know who they plan on nominating long before they gather in a city to vote on it — this year could be fun.

There was talk early on during the primary season among Republicans that they were considering a brokered, or contested convention this year to battle Donald Trump. That doesn't seem likely anymore, as party leaders have made efforts to unite the party around the frontrunner, but then again — anything can happen. The Republican convention might be the one to watch, because the Democratic convention should be pretty standard fair with delegates coming together around former Secretary of State Hillary Clinton as the nominee now that Vermont Sen. Bernie Sanders has endorsed her.

If you can't remember ever watching a convention, just think about Netflix's House of Cards. Spoiler alert: In the most recent season, when they're doing the wheeling and dealing to get Claire votes and they act all surprised when it happen — that's a brokered convention. See what I mean? It could be really fun.

It's not likely that there will be many crazy upsets like that, but one never knows. With Donald Trump and Hillary Clinton as the main event at each one, it will be worth paying attention to what goes on this year.