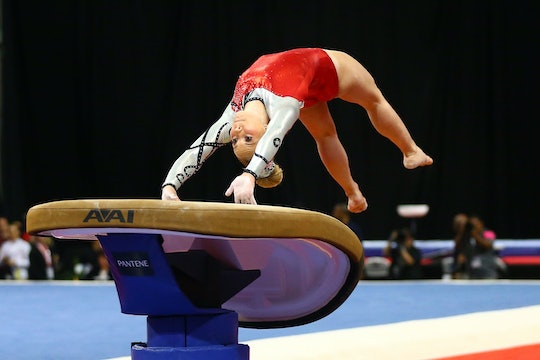 When Did The Gymnastics Vault Change? It's Not A "Horse" Anymore

As with most aspects of life, the world on competitive gymnastics is in a constant state of change. The leotards become more glittery, the tricks become more difficult, and the competitors become more talents. Even the apparatuses go through some alterations over the year. If you've been watching women's gymnastics since the days of Mary Lou Retton, then you may be wondering when did the gymnastics vault change it's appearance. Well for OG fans, this piece of equipment has not only gotten a makeover, but a new name to go along with it.

Once known as a "horse," the women's gymnastics vault is now known as the table (or tongue, in certain circles), according to the official USA Women's Gymnastics site. Unlike the vault of yore, the table runs vertically as opposed to horizontally. Specifically, the new vault measures three feet wide and two feet long compared to the old vault which measured five feet wide an 18 inches long, according to the University of Georgia's gymnastics page. Though it was implemented across the board in 2003, the table was first developed in the mid-1990s by Dutch gymnastics equipment company Janssen-Fritsen. According to Slate, the change was made after several gymnasts "rammed into the horse" or misplaced their hands during the 2000 Sydney Olympics.

So has the change helped? It seems to. The layout of the table takes away the athlete's fear of misplacing their hands on the apparatus. Additionally, athletes who choose as round-off entry for their routine are closer to the vault, minimizing their chance of flipping before placing their hands. As the USA Women's Gymnastics organization noted, these alterations take away the fear and give athletes the confidence to tackle more "aggressive vaults." Essentially, it's making these women even more badass.

But with the pros come a con or two. Mainly that there is still a risk of hitting the apparatus during your routine. According to the USA Women's Gymnastics site, "if the hands make contact toward the front and the vaulter is not very powerful" they run the risk of coming into contact with the end of the vault. A pretty scary thought when you're twisting and turning several feet in the air, right?

Overall, it seems gymnasts have been happy with the change. But, thanks to Kerri Strug's memorable one-legged landing in the 1996 Olympics, the horse will love on forever in the gymnastics world. Now if only they could find a way to make the beam less scary.