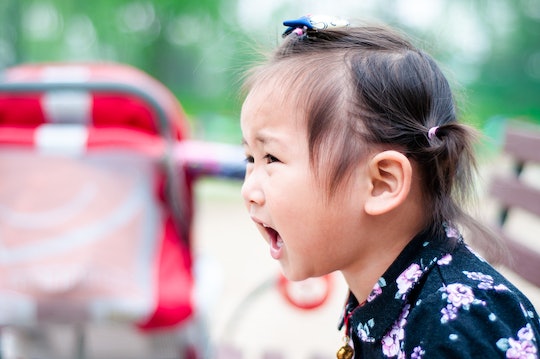 My babies were never social butterflies. They've always been reasonably shy little humans. But somewhere around 6 months old, my daughter went from the occasional smile at a stranger, to turning her head and yelling into my shoulder or the car seat. When do babies learn stranger danger? Because, yelling at the nice man at Dunkin', about to gift me ambrosia of caffeine? Way harsh, Tay.

Your child might have experienced something similar. It's like your baby went from being curious about everyone to thinking that all those strangers might be infectious. Stranger and separation anxiety is a real thing, and it can be a pain in the neck for parents. If your baby who once loved going to day care or mommy and me now screams at the top of his or her lungs the minute someone who isn't you approaches, it can make the entire process more difficult.

When do babies learn stranger danger? According to Dr. Sears, stranger danger and separation anxiety begins around 4.5 months. Your baby thinks you're awesome — he just isn't so sure about that dude over there. Or that lady. And that you might even consider leaving him with that lady who isn't you? Yeah, no. They don't have object permanence, yet. Piaget theorized that babies aren't certain that objects or people that they can't see are still there or that they're coming back, Simply Psychology noted. When they start to care, around 7 to 9 months according to the Mayo Clinic, they're at that perfect age to freak the heck out.

According to the University of Pittsburgh, there are things you can do as a parent to ameliorate the effects of stranger danger. They suggested that you hold your baby when meeting new people, tell those new people how to approach your child, and that they're experiencing stranger anxiety. I think the best advice they gave is not to care about those strangers' feelings, and don't force your baby to interact in a manner that makes them uncomfortable.

The American Academy of Pediatrics also suggested making your departure quickly as to not drag it out. I remember my son's day care teacher used to joke by saying "drop him off, tuck and roll out of here, immediately." Which is pretty much what I had to do. "See you later, honey. Mama's coming back. I love you," and then I sprinted out the door like I was going to go get Adele tickets. Every day. And he was happy by the time I picked him up. Or he was asleep. I was really OK with either.

Thankfully, The Mayo Clinic found that in most cases, this phase withers away by the time the baby turns 2, and is a common concern of parents. It's all a matter of surviving that 15 to 18 months of a stage five clinger with as little drama and interruption to a schedule that is already being held together by chewing gum and spare buttons.