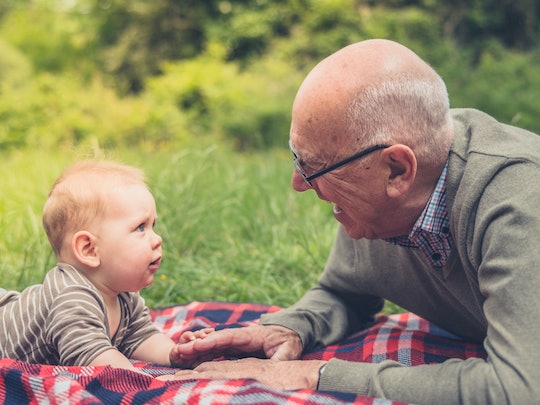 Here's When Babies Begin To Recognize Their Grandparents

Often, some of the first faces a baby sees after their parents' are the loving faces of their doting grandparents. (Even if you would rather not see your father-in-law's face for a while.) They're also an oft-viewed face with whom the baby interacts frequently. (Usually.) It might not be every day or every week, but it's enough to make an impression. So when do babies recognize their grandparents? Is it through their faces? Their voice? Is it my father-in-law Vick's salve cologne they're remembering? My own father's litany of curse words used every time he tries to close a jar?

If the grandparents are a part of their everyday lives, taking the role of an additional caregiver or bonded family member, the recognition begins quite quickly, noted Kids Health. The key is repetition and close contact with the child without large gaps of uncovered time. The farther the periods are apart, the longer it will take. If the grandparents aren't a part of their everyday lives, it will take significantly longer to determine recognition for the child. If there's enough face-to-face time, babies will begin to understand and recognize familiar faces around six to nine months of age, according to The British Journal of Psychology.

The bananas thing about facial recognition in babies is how particular it is. For instance, is your father-in-law a silver fox? Is your mom an especially gorgeous golden girl? If so, it might be that your baby will recognize them earlier, according to the journal Perception. It's true. Babies prefer faces that are attractive rather than merely symmetrical, proving once and for all that babies are judging little jerks who cannot be trusted. Sure, you think they're smiling, but a few seconds later you realize they were passing gas. Just like a baby.

However, babies also begin to notice what are referred to as "kinship features" in faces at around the same time they start to notice and recognize familiar faces. That means that at about the same time, they can start picking out family groups of people, according to The Royal Society. This level of perception is determined as general mental fitness. Here I was thinking that it was my family all sharing the same cheekbones that make our eyes look sunken in by the time we're 60. Apparently, there's slightly more to it.

How do they do it? According to The British Journal of Psychology, babies take in several cues when they're looking at faces each day. There is an entire subtext that reads across our faces when in conversation or at rest, and baby's developing brain is taking it all in and working toward logical conclusions about the relative safety of this person, relatedness, and whether they know them. They look at the emotionality, the distinct features and mannerisms, and even the small, seemingly insignificant factors like a person's eye movement and blinking come into play when babies are evaluating the faces that surround them each and every day.

It seems like babies are better at facial recognition than many of us. I know that I am total crap at it. Although, to be fair, I suffer from dyscalculia, which affects my ability to recognize familiar faces and put names to them. I don't have face blindness, which is a real thing, but instead I will know I know someone, but not from where or how. This isn't the case with my family or people I see everyday, but I do forget faces more quickly than the average person. Unfortunately, my son also suffers from this disorder, so he had stranger danger for a lot longer than others. Coupled with his Aspergers Disorder, it's been a learning experience.

However, neurotypical children? Turns out they recognize their grandparents pretty darn fast.