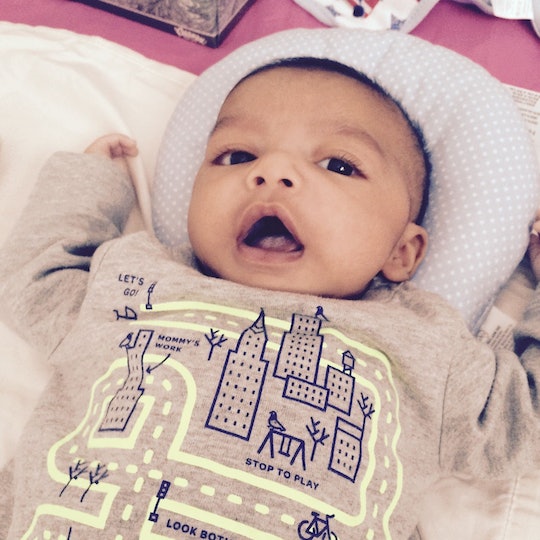 Everything You Need To Know About Those Sweet Baby Coos, According To An Expert

Along with being unbearably adorable, babies are also full of wonder and mystery. You really want to know what they are thinking, so you can’t wait until they say their first words. But before they begin talking, babies will often chatter with their own coos. If you are ready to hear your baby do something other than cry, you're probably anxious for those sweet noises. But when do babies start cooing?

It turns out, your baby is doing more than just being adorable — they're trying to talk to you when they coo. In an exclusive interview, pediatrician Dr. Jarrett Patton of Pennsylvania tells Romper, “Around 2 months of age, babies begin to coo as a way to communicate.” He says cooing is just another way your baby can socialize, much like the cute smile they give you in response to seeing your face. “Just as a baby is discovering their senses of touch, sight, smell, taste and hearing, vocalizations like cooing are part of their developmental process.”

At around 8 weeks of age, explained CNN Health, the front temporal lobe of your baby’s brain, the brain’s speech center, becomes more active. This brain activity, the article noted, allows your baby to use the back of their throat to vocalize vowel sounds like “ah” and “oh” to communicate. If your baby does not begin cooing by 3 months, CNN Health suggested consulting your doctor, who may run tests to check your baby’s hearing.

These adorable baby sounds will eventually turn into actual words. “Cooing ultimately develops into other syllables, like dada or mama,” says Patton, “and language continues to progress so that by 1 year of age, they say their first meaningful word — when mama actually means mom.”

When your baby does begin cooing, you may want to keep the conversations going. “Parents can support their baby's language development by talking back to them when they coo and by reading books to them daily," suggests Patton. Sooner than you know, that cooing will turn into words. (One of them will probably be "no," just a head's up.) In the meantime, you can enjoy your baby’s adorable wordless vocabulary.