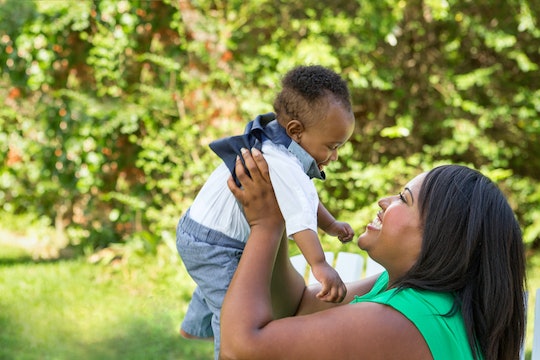 Here's When Your Baby Will Say Mama

Up until now, your baby has cried because she is hungry, sleepy, cranky, overstimulated, bored, and every other reason. But, as your infant starts becoming more and more social, her method of communication will develop beyond just crying. Soon, you'll see social smiles, and hear the sweet coos, babbles, and giggles that babies are known for. As your little one grows cognitively and socially, you might wonder, when do babies start saying "mama"?

Babies typically begin babbling between 8 and 12 months of age, according to Kids Health. They will usually string together consonants, like "bababada," the article mentioned, before moving on to separate syllables, like "ba," "da," and "ga."

Many moms wonder why babies might say "dada" before "mama," and the reason could be that it is simply easier for most infants to make the "da" sound, according to The Developing Person Through Childhood and Adolescence.

In a study published by the Journal of Experimental Child Psychology, Professor Mary Fagan noted that there are constraints on what sounds infants can make early on due to the structure of their mouths and their limited motor control. The "ma" requires sustained closure to hold the lips closed, so that sound often comes along a little later, Fagan mentioned in her study.

Certified Speech-Language Pathologist Avivit Ben Aharon confirms this notion in an interview with Romper, noting that nasal sounds, such as "m," are more difficult, and babies tend to say "dada" first because it doesn't require forcing air through the nose.

In an interview with Romper, Jennifer Hunter, Certified Pediatric Speech-Language Pathologist based in Brooklyn, New York, notes that babies typically are able to say "mama" around their first birthday, but there's no set time for it to happen. If your baby makes sounds similar to "mama," go ahead and show your excitement, Hunter says, as it will reinforce your little one to keep talking. Babies begin to attach words to meaning by being reinforced by their parents' excitement, and soon will understand what it means.

When it comes to child development, there is a wide range of normal. Keeping an open conversation regarding your baby's milestones with your pediatrician will allow you some peace of mind. And when your baby does say "mama" intentionally, to you, it's sure to be the sweetest sound.