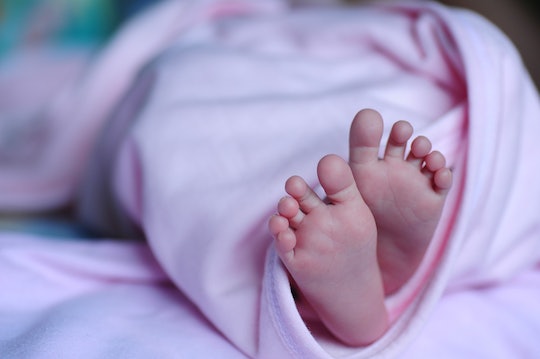 Here's When You Can Give Your Baby A Blanket

As many people already know, babies are not supposed to use blankets, pillows, or bedding, or have anything loose in their sleep space. It's not so parents can save money — it's so your little one is protected from potential strangulation, suffocation, or Sudden Infant Death Syndrome (SIDS). But eventually these things become less likely and you may start to wonder when do babies start using blankets?

Dr. Joanna MacLean, a sleep medicine physician, pediatric respirologist, and the medical director of the Stollery Children's Hospital sleep lab in Edmonton, told Today's Parent that babies can start using blankets when they turn 1. It's unnecessary for parents to eschew blankets past that point because, as long as they're used safely, they aren't as much of a safety risk. According to an article from Parents, however, some pediatricians recommend waiting until your baby is 2 to introduce blankets or other bedding, just to stay on the safe side.

So what's a parent to do to keep baby warm? Well, when they are first born, swaddles are the way to go. Once your baby breaks free from the swaddle, putting them in a sleep sack or footie pajamas can help keep them warm until it's time to introduce bedding.

But still, some pediatricians say a small, lightweight blanket is OK as early as six months, depending on the circumstances. Dr. Jennifer Roche, a pediatrician in Massachusetts, told Parenting that as long as a baby can definitely lift his or her head and either crawl out from under it or push it off, a small blanket should be fine. A knit blanket, full of wholes and open spaces, may be a good choice if you get the OK to add a blanket. That being said, the majority of crib or bassinet-related deaths are due to a cluttered sleep environment, according to the Consumer Product Safety Commission (CPSC), so if you are hoping to introduce a blanket sooner rather than later, it's a good idea to check with your pediatrician to see what their specific recommendations are.

Heavy comforters or thick, fluffy fleece blankets aren't a good idea until your child is much older, because, as sleep consultants Kira Ryan and Leah Johnson told The Bump, some toddlers bunch blankets up and use them to assist in trying to climb out of their crib. Thinner blankets and warmer pajamas are likely better bets, once blankets are acceptable.

Clarifying recommendations with your baby's pediatrician or other specialist is the best way for you to know when it's safe for your baby to start using a blanket. Discuss which are preferable and from which you should probably steer clear and feel confident that your little one will be sleeping cozily and safely.