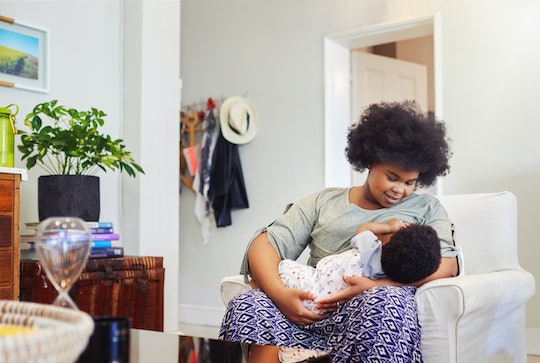 Weaning Can Cause A Major Shift In Your Hormones, So Here's How To Prepare

Initially, Ruiz says, this will cause a woman to experience breast engorgement because she is no longer feeding with the same level of frequency. This may last for several days until the breast hormone system regulates milk production. "As the ovaries begin to function and menses returns, they will begin to feel their cyclic changes associated with menstruation," Ruiz says. "Each woman has their own symptoms, whether it be breast tenderness, ovulation pain, or premenstrual uterine cramping.”

And don't be surprised if it takes a bit for everything to regulate once you are no longer breastfeeding. Your period may be irregular for a while as your body adjusts to the shifting hormones. You may notice that you have one really short cycle followed by a long one (around 35 days). “Your cycle should stabilize within a few months or after you've stopped breastfeeding,” per Parents.

Weaning can also lead to feelings of sadness, depression, and/or anxiety. A drop in prolactin can cause depression, per Psych Central. Weaning also causes a drop in oxytocin, which is the feel-good hormone released while breastfeeding, and PsychCentral suggests continuing to cuddle and hold your baby often even after weaning, which can help release oxytocin. And, not only are your hormones all over the place, but no longer breastfeeding your little one brings with it the end of a rather significant era in your journey as a parent. For many moms, that can bring with it a lot of emotion. There are a few ways, however, to make the process more gradual. As Kelly Mom reported, a quick weaning process can lead to a more abrupt shift in hormone levels, which may in turn cause harsher symptoms. "Dropping no more than one feeding per week is gentler on both mother and baby," the website suggested.

"When the weaning is swift, there can be a dramatic hormonal shift that can contribute to these symptoms," Leigh Anne O’Connor, an International Board Certified Lactation Consultant (IBCLC) and parenting coach, tells Romper in an email interview. "There is also less oxytocin when one is not lactating, so that can contribute to fatigue."

But if "feelings of sadness or depression linger," then it's important to seek professional help, Dr. Batya Grundland, a family physician at Women’s College Hospital in Toronto, told Today's Parent.

Other symptoms that might accompany weaning include attachment issues, increased sex drive, anger, heart palpitations, irregular periods, and migraines. "Our bodies go from producing tons of milk to drying up, and the effects are much more than just physical," noted Baby Gaga. "The hormone changes will affect everything, from our breasts to our brains."

It's also important to keep in mind that moms and experts alike agree that babies have a natural instinct for this whole weaning thing. It was my own experience that the gradual weaning process made the transition that much easier for me and my daughter, which also meant less of a hormonal roller coaster. And I swear it was her who was calling the shots along the way — she knew when enough was enough. By the time we were done breastfeeding at 22 months, it seemed like she just woke up one day and it was all over.

And that's the thing — as hard as it is along the way, it really is over before we know it, which is truly a blessing and a curse wrapped in one.

More Like This
Reddit Is Stunned By Mother-In-Law Trying To Breastfeed Her Granddaughter
Please Stop Telling Moms To Breastfeed As Baby Formula Shortage Worsens
Ashley Graham On The “Fun, Organized Chaos” Of Raising Twins
These 4 Sleeping Positions Will Keep You Comfortable After A C-Section

This article was originally published on March 10, 2018