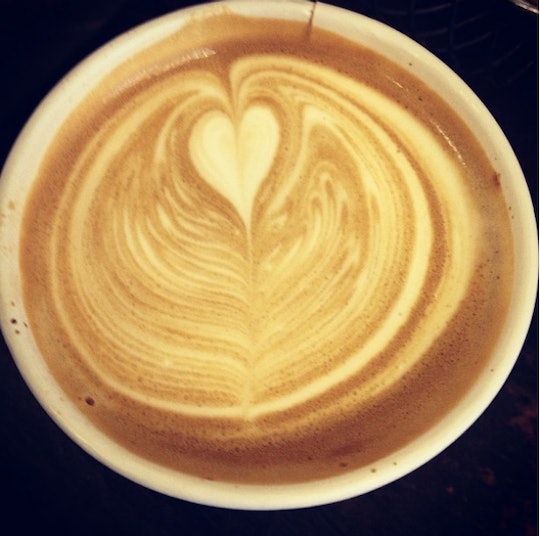 When Do I Have To Give Up Coffee During Pregnancy? Sooner May Be Better

Although it's still not determined whether or not caffeine is totally safe to consume during pregnancy, it's perfectly valid to wonder when do I have to give up coffee during pregnancy? The answer is probably as soon as you can. And if you live for venti lattes, that positive sign on your pregnancy test might have you a little, er, irritated.

The reason why doctors don't know for sure if caffeine is safe for the developing fetus is, according to Parents, because no one wants to perform the needed research (i.e. giving expectant moms caffeine) to get a definitive answer. "It isn't ethical to give 1,000 pregnant women an unknown drug and see how many have complications," OB-GYN David Elmer told Parents. Point taken.

According to the American Pregnancy Association, caffeine crosses the placenta and reaches the fetus. And, since your developing baby cannot metabolize caffeine like an adult can, it may interfere with healthy development. So with the safety of coffee being up in the air, you might be wondering about alternatives that will keep you energized while also keeping baby safe. As Mayo Clinic noted, decaf coffee contains trace amounts of caffeine — between two and 12 milligrams— so to be safe, you should probably give up any kind of beverage that contains any amount of caffeine. However, there are plenty of other ways to keep your energy up, whether it's in the morning, or during that midday slump.