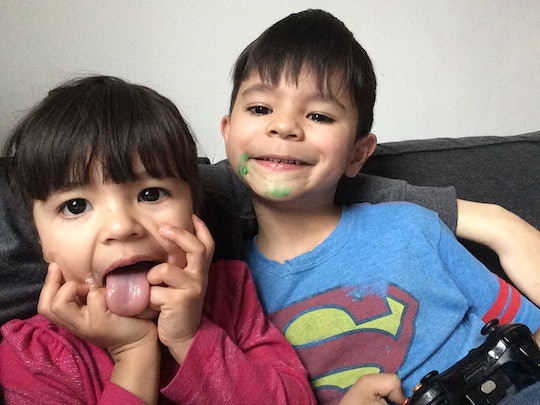 I can pinpoint the day my son started giving me false smiles. It was two days after I had my daughter. My husband and I went to my in laws' house (where my boy was staying while I was giving birth) to take their very first pictures together as brother and sister. My son was unimpressed holding our newest little bundle of joy, but joined the party as much as was required to give a little smile, forced and stunted by his confusion. I don't remember him doing that before, but when do kids start fake smiling?

There is a clear difference between what we understand as a natural smile and one that is forced or mimed for the sake of others or one's self. The natural smile is known in science as a Duchenne response, noted The Journal of Nonverbal Behavior. While for the most part, a genuine smile is just that, certain people can force the same action... but it is a learned skill. So when kids find themselves in a situation where they're supposed to grin for a photo or pretend to like something gross that Grandma made, whether or not they can pull off a fake smile depends on the maturity and development of the individual child (meaning that every kid figures it out at their own pace).

It's during childhood that we learn how our body language impacts others emotions and their responses to us. I remember keenly how my grandmother would tell me that if I constantly sat in my lessons with my arms crossed across my chest, and a "sourpuss" on my face, that no one would want to be my friend. "Sparkle Eyes, you have to smile if you don't want to scare people off," she said. While I was a naturally smiling child, I hated my lessons and therefore probably came across as rude. But I heeded her advice, and began to make friends, even with my supremely elderly teacher who spoke of the plagues of Egypt with more gravity than necessary for a group of preschoolers.

Scholars have been studying this for a long time. The nature of how and why we smile finds its roots all the way back to the days of Darwin. As reported on the website of renowned psychologist Dr. Paul Ekman, one study from the early 80s found that in early childhood, before school begins for most children, kids learn to adapt their body language for each situation, smiling included. Yes, this process does begin with being prompted to smile, either by a peer or a parent, but it evolves into the awareness that one's facial features and body language can alter the course of a situation.

A recent study in Evolution and Human Behavior found that children begin to recognize and understand false smiles usually between ages 2 and 5. If you think about it, this falls in line with the time when children are beginning to play more socially, developing other prosocial behaviors. They're also being prompted to smile for pictures all the time. The study was fairly grand in its specs, and took into account a wide range of smiles, and it was found that kids just knew.

When do kids start fake smiling with each other? If you follow the science, it's likely in that period as well. Kids are more intuitive than we give them credit for being, and have a genuine desire to like and be liked by others. However, just as all of the studies have stated, it's going to be a range, just like first steps, first words, and all the other firsts. If you're curious, have your baby say "cheese."