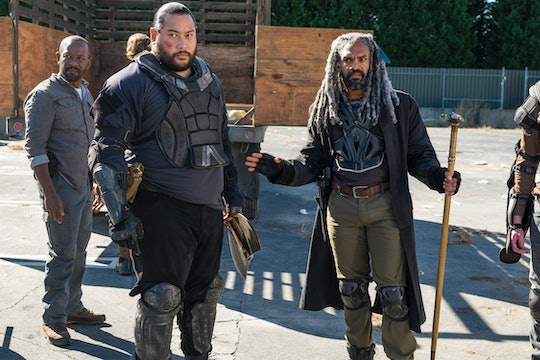 War is drawing ever closer on The Walking Dead, but all of the pieces haven't fallen into place yet. It seems obvious that the various communities will band together eventually to create a massive army with which to take on Negan (at least that's how it goes in the comics, so it's a fair bet that the show will follow suit), but so far the Hilltop and the Kingdom are still resistant to the idea. But tensions are rising and the promo for "Bury Me Here" hints at a bad run-in between the Saviors and the Kingdom. So when do Negan and King Ezekiel meet on The Walking Dead?

It seems like Negan lets his people handle things, for the most part. He conducts the majority of his business through proxies, which was why it took so long for anyone to find him in the first place; with his dedicated crew of jerks out there doing the dirty work for him, Negan himself stays protected. That could mean the Saviors will continue to handle any and all confrontations with the other communities, putting off a meeting between the two leaders for even longer. However, there's no way the show would pass up a Negan vs. Ezekiel meet-up forever.

The summary for "Bury Me Here" indicates that a routine drop-off between the Kingdom and the Saviors doesn't go as planned, but makes no indication about whether or not Negan is present during the altercation. He isn't in the promo for the episode, either. It's likely that this episode will continue to fracture the perpetually tense relationship between the two groups, pushing Ezekiel close enough to the edge that he finally decides to fight back. It doesn't seem like this will be the moment for the big showdown between Ezekiel and Negan, but predicting just when it will happen isn't easy.

Negan and Ezekiel crossing paths someday does feel like a foregone conclusion. As two very showy, exciting characters who are on opposite sides of the season's major conflict, it's just a matter of time until they end up butting heads. And I, for one, can't wait to see how that will all play out.