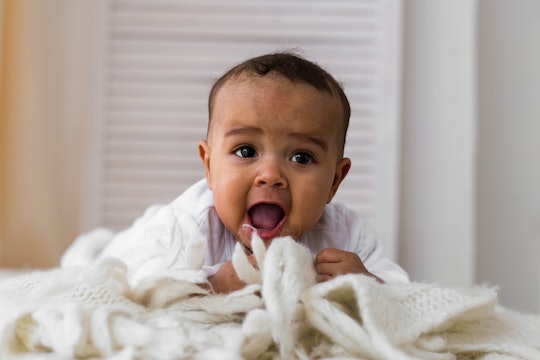 Here's When Your Baby's Personality Actually Develops, According To Science

When your child is a newborn tucked into your arms, you wonder how your child will grow and what they'll be like as they get older and more independent from you. Will your happy baby become a happy child and a cheerful adult? Will your willful toddler be as stubborn in the boardroom as they are in the playroom? The development of personalities in babies is a fascinating science that has been long studied throughout the years, giving parents and researchers much to consider as they reflect upon their earliest wonderings. If you're similarly curious, this is when psychologists think personalities form.

The first large scale studies about the development of personality began more than 70 years ago when Carl Jung published The Development of Personality. This seminal work in the field of behavior is as much about societal input as it is about a person's inherent qualities and affectations that are unique to themselves and apart from how they are nurtured. Jung posited that children's earliest experiences began the roots of their personality, and that environmental and social factors assist in furthering the development. Jung believed that personality begins to form from a baby's first breath, and possibly even before that, back to their time in the womb.

However, a recent Russian study refutes Jung to a point. Their research, published online two years ago, found that only certain pieces of childhood personality maintain throughout adulthood, namely disinhibition. In their study, researchers painted the definition of disinhibition with a fairly broad stroke, asserting that it is any behavior that eschews cultural norms, and that which could also be described as a lack of inhibition or forethought. Essentially, they're saying that the only part of a personality that would stay from childhood to adulthood would be this type of temperamental trait, and that a larger portion of personality is apt to change dependent upon circumstance and societal input.

This reflects much of the recent literature published by developmental psychologists. The imprecision of the science is what makes it so complicated. Psychologist Dr. Frank T. McAndrew wrote on Psychology Today that even though humans have examined personality since the ancient Greek times, we are not united in how or what defines personality, and therefore cannot make exact decisions. "One of the problems with early personality research was that it often relied heavily upon the measurement of very broad traits such as self-esteem, and the usefulness of broad traits for predicting specific behaviors is limited," he wrote.

Scholars are now accepting that there is a more nuanced answer to when psychologists think personalities form. For instance, in an article titled "Personality Development in Childhood" published in Personality Development Across the Lifespan, researchers noted that there are early childhood predictors for adult outcomes, but not wholly are they apart from experience. Actually, there are a ton of variables that might influence personality, but that the core of a person, whether they're introverted or extraverted, conscientious or more reckless, or how agreeable they are, forms and concretizes itself sometime in early childhood, and remains steady for the rest of their lives.

Another study published in Personality and Individual Differences in 2016 affirms the relationship between early temperament and personality, but researchers asserted that it begins even earlier. They found that childhood personality and beyond reflects largely on the earliest days of a child. They argued that temperament of infants can predict the temperament of children, particularly how cautious an infant might appear, and how they react to things that are pleasurable.

While there is no scientific consensus that definitively states when personalities form, it appears as though there are inklings of personality present even in those first days of life.

More Like This
What To Do If Your Baby Sounds Congested
Does The FDA's Plan To Limit Lead In Baby Food Go Far Enough?
When Does A Baby Recognize Their Father? A Pediatrician Explains
I Took Drinking Out Of My Bedtime Ritual & Unfortunately, It's Great
What Parents Are Talking About — Delivered Straight To Your Inbox