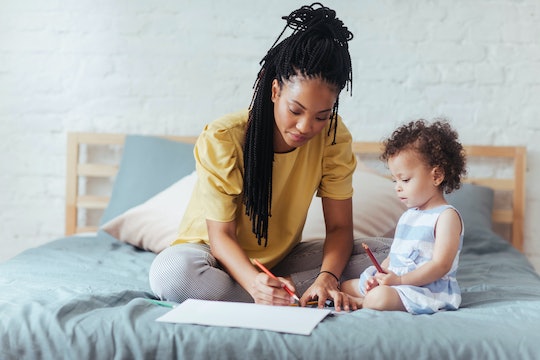 Children are constantly awash in a world of brightly colored toys and clothing designed to pique their visual interest from their infancy through childhood. Learning to differentiate between these shades is a huge developmental milestone, but when do toddlers learn colors? It feels essential that they recognize their bright red overalls as bright red, or that marker they've been sleeping with for three weeks as the perfect shade of yellow, right?

Like almost all of the major developmental milestones, it will happen in its own time, but there is a range that is considered average. Board-certified developmental and behavioral pediatrician Dr. Eboni Hollier from Houston, Texas tells Romper, "Around 18 months of age, many toddlers begin to recognize colors." That's not to say that they're suddenly going to be strolling through Target with you, demanding that you buy them the turquoise socks instead of the green ones (that comes later). Hollier says, "It is typically a bit later that toddlers are able to name colors. Most children can name at least one color by the age of 3 years."

Even between my own children, there was a pretty vast difference between when they each learned their colors. My son was able to group and name colors from the moment he developed the language to do so. Meanwhile, my daughter took her time, and instead of naming colors would group them together. Even at a very early age, she had a hierarchy of colors that she liked. (Turquoise and purple: yay. Green and orange: get thee away.) She was almost 3 before she found the words for them.

Since then, my life has been an expensive comedy of errors due to her excessive need for everything to match head-to-foot, but other than that, she had no problems catching up with her brother. Hollier says that's because "the time that many children experience a 'language explosion' is between 18 to 30 months of age," and that it "is a great time to begin teaching many concepts, including colors."

Melanie Hartmann, a former Head Start assessment psychologist, agrees with Hollier, telling Romper that most children "begin to name their first colors by 2.5 years of age" during that language explosion. If they learn to differentiate and name colors a little later than that, it doesn't mean that it's time to worry. Researchers wrote in Scientific American that, inevitably, parents want to compare their children to others, and if they notice that their children aren't developing as swiftly as others, they worry that there is something wrong. But it couldn't be further from the truth. While it is the case that if your child is falling outside average parameters there might be cause for concern (such as color blindness or a language delay), most of the time, it's nothing to worry about.

Color identification, according to the article, is a unique monster. Where there are ways to help children speak a little sooner, read a little sooner, learn math a little more quickly, Scientific American wrote that there is no way to move this along. It has to do with the complex system of how children learn words and language, as well as develop the visual acuity required to learn to differentiate between each color. It can be influenced by myriad factors, including languages spoken in the house, and the culture and community in which children are raised.

The concept is so difficult that it makes sense that children would need time to figure it all out. It is easy to believe that noting and noticing color differences is intuitive and natural, but that's not the case. If you're worried about your child, definitely talk to their pediatrician, but chances are, it's all fine, and you, too, will be figuring out how to special order soccer socks in just the right shade of banana yellow to match their jersey.

More Like This
17 Best Potty Training Products For Toddlers
26 Toddler Lunch Ideas They’ll Actually Be Excited To Eat
Should You Be Giving Your Toddler Melatonin To Help Them Sleep?
The 18 Best Purses For Moms With Toddlers