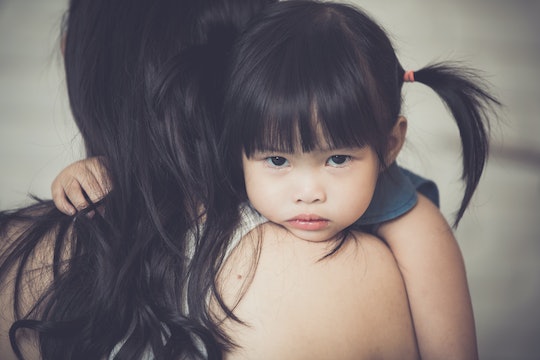 One universal truth about babies and young children is that they are in a constant state of change. And while this is great when it comes to first steps and other milestones, it's not so great when the quality of your child's sleep is what changes. Toddlers are notorious for having fears around bedtime. From monsters under the bed, strange sounds coming from outside, and fear of the dark, many children's books have been written about toddlers who are afraid to go to sleep. But when do toddlers start having nightmares? Experts say there's not a minimum age when bad dreams start, but by the time kids reach preschool age, they can at least recognize the difference between dream and reality.

"It's not clear at what age kids begin to dream, but even toddlers may speak about having dreams — pleasant ones and scary ones," reported KidsHealth in an article reviewed by D'Arcy Lyness, PhD. The article also noted that nightmares often reach their peak in the toddler and preschool phase of development due to those common nighttime fears. We often think of a nightmare as a dramatic event that involves sweating, thrashing, and a child who wakes up crying for your help. However, nightmares don't necessarily interrupt sleep. For example, my 4-year-old daughter often tells me about a nightmare or bad dream she had the previous night, but luckily they don't seem to wake her up in the moment.

But plenty of kids do wake up screaming from nightmares, which wakes up parents and leads to a sleep-deprived family. Because all dreams, good or bad, occur during Rapid Eye Movement (REM) sleep, nightmares are most likely to occur in the middle of the night or early morning, according to SleepEducation.org. If your child wakes up in the middle of the night from a bad dream, you still have a good chance of being able to comfort them and get the two of you back to sleep. But a 4 a.m. wakeup can be trickier. Your child may not want to go back to sleep, leaving both of you to start your day much earlier and grouchier than usual.

If your toddler's active imagination and bedtime fears are turning daily life into a "waking nightmare" for everyone, there are a few different approaches you can try to improve the situation. First, try to eliminate any stressors in your child's life since nightmares "can rouse a child in part because they trigger the body's fight-or-flight response that elevates heart rate. Any source of stress — even being overtired — can increase the risk of nightmares," reported Parents. And one stressor can easily fuel another, such as a toddler who resists bedtime because they are afraid of having a bad dream. By the time you finally get them to sleep, they may go to bed in a state of over tiredness and stress from worrying about nightmares.

You can help ease stress in your child's life by practicing good listening skills that allow kids to process their feelings rather than encouraging them to "just forget it." Patty Wipfler, Director of Hand in Hand Parenting, advised parents to be patient when their children are in the midst of a nightmare. Instead of trying to quickly dispel their feelings, as we often instictively do, she argues that there is value in letting children express their feelings in order to work out the root cause of the fear. Here are Wipfler's suggestions for what you can say as you comfort a child fresh from a bad dream:

In addition to offering reassurance in the moment, try to create a calming environment for the last 30 to 60 minutes before your child goes to bed. Eliminate television and other screens, and invite your child to join you in a brief meditation or relaxation technique. For example, the two of you could try this guided seven minute progressive muscle relaxation together. If you are doing everything possible to help your child cope with and avoid nightmares, but nothing seems to work, consult your pediatrician for further recommendations.