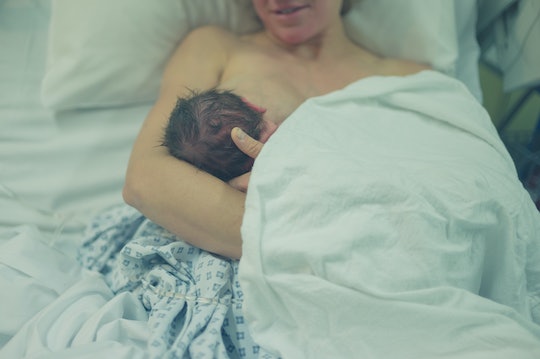 I remember the first few hours after giving birth for the first time much in the same way that one remembers a car accident or falling down the stairs. That is to say, I barely remember it, but I know it was traumatic. I had a very complicated delivery requiring serious medical intervention. My second delivery? I laughed and ate jellybeans and I got to cuddle and nurse my daughter right after she was born. I wondered if that was how it was always supposed to be. When do you breastfeed after delivery if all goes according to plan? Was my experience normal?

According to the World Health Organization (WHO), breastfeeding should begin almost immediately upon delivery, regardless of mode of delivery, be it cesarean or vaginal. WHO suggested that this improves not only the bond between mother and child, but that it leads to an easier latch and mothers allowed to breastfeed right away are more likely to continue breastfeeding throughout their child's infancy. If a hospital has been designated as "baby friendly," then they will assure an early start on breastfeeding if the mother has decided that's what she wants to pursue. Otherwise, bottle feeding isn't as immediate, and skin-to-skin contact is given primacy.

It's important to note that these are all occurring in ideal scenarios. While doing research for this article, I called and spoke with several charge nurses at hospitals across the New York City area and asked them, "When do mothers breastfeed after delivery?" Their answers were all pretty similar. They note that while they'll do everything they can to make it possible to get your baby to nurse as soon as possible after they're born, including facilitating skin-on-skin contact, and even doing APGAR testing while you're holding your baby, sometimes it's just not possible.

For instance, Sharee DuBois, RN of Brooklyn, tells Romper that sometimes it has nothing to do with the mother, and everything to do with the child. "If your child is born in distress or with meconium in the fluids, we have to watch them more closely, and often that means separating mother and child, which no one wants to do." In cases like this, breastfeeding your baby might wait a little while, but it's only so that the professionals can make sure your baby is healthy and sound.

"Sometimes when we check the baby's mouth during their scoring, we'll find a palate abnormality that precludes breastfeeding, but that's rare." DuBois notes that most times, cleft palate is a reasonably easy fix, but breastfeeding is usually out of the question until it's done. "However," she adds, "if the mother is in distress at all, she is our primary focus, and we want to make sure she's able to not only hold her baby to nurse, but that it won't cause any undue pressure on her health. She needs to be tended to before anything else."

There's something really reassuring about knowing that the health of the baby and the mother come before anything else. In the heated debates between the "fed is best" and the "breast only" factions that seem to be occurring more and more these days, it's nice to step back and get a completely non-emotional, clinical response regarding the topic. Yes, there are significant benefits to nursing right away, but none of those benefits eclipse the need for a safe, healthy mother and child in an environment where the mother isn't feeling pressured one way or another.

If all goes according to plan, and you want to breastfeed your baby, rest assured that your nurses are doing everything they can to get your baby to your breast as soon after delivery as humanly possible, so long as it's safe.

More Like This
Can You Breastfeed After A Breast Lift? Experts Explain
There’s A Reason Your Baby Always Falls Asleep While Breastfeeding
If Breastfeeding Makes You Tired, Here’s How To Keep Your Energy Up
The Best Halloween Family Pajamas To Match Your Boos