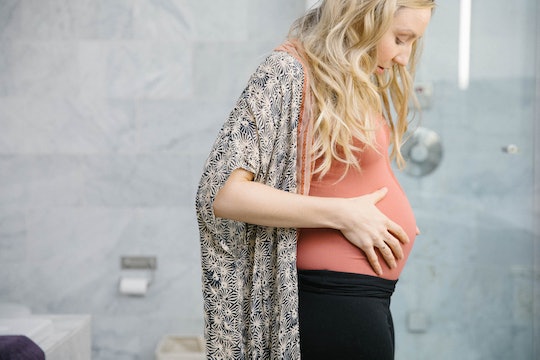 There is no end of conversations about how much or how little weight women will gain during their pregnancy, but there is very little discussion of the timeline of that weight gain. If you’re pregnant, you want to know when you gain the most weight during pregnancy so you can feel adequately prepared. But of course, like most things in pregnancy, nothing's that straightforward.

The weight gain of pregnancy is a marathon, not a sprint. It's a long, slow jog up the scale until you deliver. The American College of Obstetrics and Gynecology (ACOG) reported that, depending upon your weight when you get pregnant, you should gain between 10 and 35 pounds over the nine-month period of pregnancy. However, when those pounds kick in is somewhat unique per mother. The ACOG study found that most women shouldn't gain any more than 4 pounds during the first 12 weeks of their pregnancy. There isn't a need for a big calorie boost, and you're not building the blood and fluid reserves that you do during subsequent trimesters. During the second and third trimesters, you should be gaining between half a pound and 1 pound per week. Some women experience a jump somewhere in their second trimester, according to the Institutes of Medicine (IOM) at the National Institutes of Health, not only because of a lot of water weight gain, but also because of increased appetite after possible nausea in the beginning of gestation.

I contacted Dr. Monique Rainford, OB-GYN, of Baltimore, Maryland, and a doctor for Your Doctors Online, and she tells Romper that while no one is really expected to "follow" a rule, "a general guide is to gain about 10 pounds up to 24 weeks, and roughly 1 pound per week after that.” She says that following this weight gain track keeps a woman's weight gain to the recommended 25 to 35 pounds for a normal, healthy pregnancy. This would put you around the second to third trimester as the time where you gain the bulk.

When I was pregnant, I gained the lion's share of my pregnancy weight between weeks 24 and 34, and that's pretty common, according to maternal nutritionist April Schuyler, MS RD. She tells Romper, "Pregnancy gain isn't a straight line. Weight will dip and spike as the weeks go on, and you need to remember, it's not all fat and baby weight in those numbers." In fact, she says, most of the weight gained in the second trimester is fluid related. Your body adds a ton of water and blood volume during this period to cushion and feed the baby for the entirety of the pregnancy. It also has to be enough to keep your system running as smoothly as possible while you provide for your child.

And it’s going to be different for different moms, notes Rainford. The recommended weight gain for underweight women can range from 28 to 40 pounds, so they “can aim to gain more weight from the beginning of pregnancy up to 1 pound per week.” For overweight mothers, she says the recommendations are not to gain more than 25 pounds for the entire pregnancy, and that they might not gain very much in the beginning of the pregnancy. But she also stresses that this should not be the crux of your worries while you're pregnant, because it’s not a specific set of rules or milestones.

It's so easy to get caught up in the numbers while you’re pregnant. Having been both an obese person and a very thin person, I was almost obsessed with the scale when I was pregnant, and that's not great, according to Schuyler. "It's easy to get into a pattern of disordered thought when you're pregnant," she says, and notes that between Hollywood making pregnancy look like a breeze that you simply bounce back from, to rampant before and after photos on Instagram, it's nearly impossible not to get caught in a comparison trap.

When you gain the most weight during pregnancy is based on your body, your needs, and is completely individual. However, Schuyler notes that nutrition is important, not only for your own weight gain, but also the health of your child. Recent research shows this to be true. A 2018 study published in a companion journal of the American Journal of Perinatology found that women who receive nutritional support during their pregnancies, focused on eating healthy and whole foods, were the most likely to achieve a proper weight gain over the course of their pregnancies, even more so than a strictly exercise based regimen. And a recent study in the Annals of Nutrition and Metabolism highlighted the necessity for a balanced diet, noting that consuming certain foods, like fish, actually prove incredibly beneficial. Researchers wrote, “Regular consumption of fish as well as supplementation of omega-3 long-chain polyunsaturated fatty acids was found to reduce the risk of early preterm birth prior to 34 weeks of gestation.”

While most mothers probably gain the bulk of the weight of pregnancy in the second trimester, it is by no means set in stone. The important thing is that you eat as well as you can, move your body when you can, and pay attention to your body. We are all just doing the best we can as mothers, and fixating on one thing is only going to complicate the stress in your brain, tempting though it might be.

More Like This
How To Increase Your Sex Drive While Pregnant
What Does Amniotic Fluid Smell Like? A Nurse Explains
New Report Shows 80% Of Pregnancy-Related Deaths Are Preventable
Are You Leaking Amniotic Fluid Or Is It Normal Discharge? Experts Explain

This article was originally published on Jan. 20, 2018