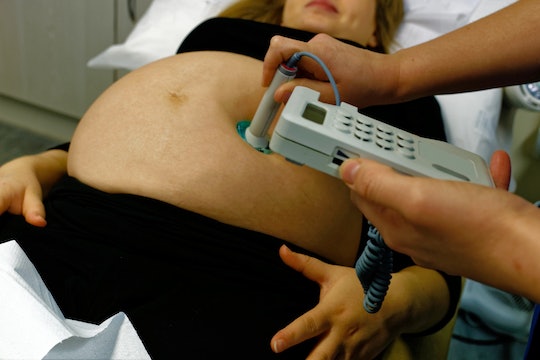 Hearing your baby's heartbeat for the first time is one of the true joys of pregnancy. I know that for me, it really solidified in me the knowledge that I was in fact growing a human. Hearing the heartbeat allowed my conscious brain to catch up to what my body was doing when it had thus far been very abstract. It was a transcendent experience. If you're newly pregnant, you're probably anxious to hear it, too. But when do you get to hear your baby's heartbeat?

When your doctor listens to your baby's heartbeat depends a lot upon the practice. Some practitioners will use a transvaginal ultrasound to determine gestational age around weeks eight to 10, according to the American College of Obstetrics and Gynecology (ACOG). At this time, the heartbeat can be heard and detected. However, some practitioners wait to see patients until at least week 10 when the fetal heart rate can typically be detected by a noninvasive doppler machine placed on the outside of the abdomen, as per the website of OB-GYN Dr. John D Garofalo.

I live in New York City, and from my experience, and judging by what my friends have told me, OB-GYNs tend towards more monitoring, such as an initial scan that also monitors a fetus' heart rhythm. Midwives, on the other hand, take a more laid back approach, choosing to wait until the tenth week or later to listen in on your baby.

The transvaginal ultrasound isn't as terrible as it sounds. Yes, it's invasive and a bit weird, but it doesn't hurt for most women. Although my husband was a bit shocked when the doctor brought out the wand and rolled a condom over it before lubing it up. I think his eyes actually crossed a bit, and he was pretty confused as he held my hand. It's probably best to warn your partner first. (Even if in hindsight it was really funny.) Lisa Roberts, a registered nurse in Texas, tells Romper that "in the office or at the hospital, a doctor, nurse, or even an ultrasound tech will monitor the heartbeat as soon as the first appointment. Some doctors will check it every appointment; some are happy as long as the baby is moving well."

The blip on the screen that you're told is your baby is hard to believe at first. At eight weeks, it resembles nothing so much as a kidney bean with a flicking light in the center, but let me tell you, once you see it, your world shifts. There's no other way to describe it. Once your doctor turns the volume up and that rapid "ba dum, ba dum, ba dum," fills the tiny sterile room? I felt my own heart growing like the Grinch's after he realizes Christmas is pretty freaking cool.

Your doctor will listen for your baby's heartbeat throughout your pregnancy, and especially when you're in labor, according to ACOG, but it's always extremely cool. How often are we so gifted to be able to hear something come alive? Something you've created and nurtured inside of yourself?

I struggled to get pregnant. It was a lot of harsh ups and downs, and it took years each time I wanted to grow my family. There were some awful setbacks, and a lot of heartbreak, but hearing a healthy heartbeat went a long way towards healing what had been damaged inside of me. I won't lie to you — I was still pretty much ridden with anxiety until they were born, and then the nature of the anxiety shifted. But hearing that heartbeat is an enormous gift, even if it's just a doppler confirmation.