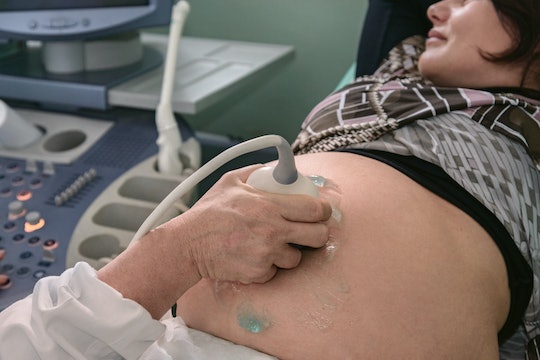 When Do You Get Ultrasounds During Pregnancy?

Once you reach a certain age, it looks like every other post on your social media site is an ultrasound pic. These images, fuzzy as they may be, offer a glimpse into the mysterious world of the womb, as well as the growing person who occupies it. And when you discover you're expecting, it's normal to wonder when do you get ultrasounds during pregnancy? Because chances are you want your own sneak peek of the baby ASAP.

As with most everything pregnancy related, your mileage may vary. Depending on your particular pregnancy, health conditions, and even the protocol of your doctor's office, you may get anywhere between one and a half-dozen ultrasounds over the course of your pregnancy. That said, there are some general times at which many women get an ultrasound during pregnancy.

Initially, when you are six to eight weeks pregnant, you may get your first ultrasound, which is also known as a sonogram, as noted in Parents. As further explained in Parents, your baby is still very small at this stage of the game, so this transvaginal scan may not produce a clear image of your little one. However, it's important to remember that your doctor is using a transducer to generate sound waves that are then generated into images, as explained by the American Pregnancy Association. Which is extremely cool technology, no matter the results.

Later, when you're around 11 to 14 weeks along, you may take a nuchal translucency (NT) scan, which Baby Center noted is an ultrasound that may help determine your baby's risk of developing Down syndrome, chromosomal abnormalities, or congenital heart problems. As further explained by Baby Center, this test is available for all pregnant women in their first trimester, but it can only assess risk, not provide diagnosis. However, you can use these results to determine whether you want further testing.

Lastly, when you're 18 to 21 weeks pregnant, it is time for the detailed ultrasound scan, as explained by the National Health Service (NHS). Chances are, this is the test you've been looking forward to all along. At this time your sonographer can look over your baby's development in detail and test for potential health conditions, as further explained by the NHS. (In the majority of cases, everything develops normally). And, as noted in Parents, you can determine your baby's sex and get a much better view of your little one's development. For many parents, it's an exciting ultrasound that lets you see the first discernible images of your child.