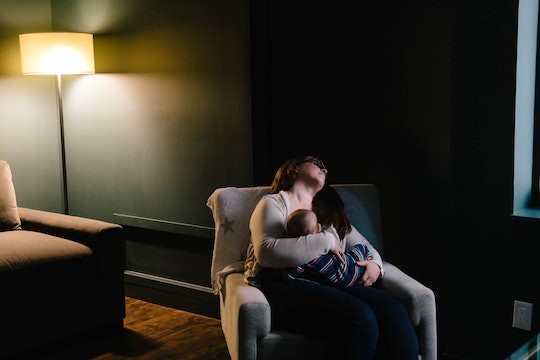 Here's When Experts Say Babies Should Go In Their Own Room, & Why Age Matters

Friends, I have a confession. Our 8-year-old daughter sleeps in our bedroom, which is not when experts advise moving children into their own room for sleep. Every night since she was a baby, we dutifully put her down in her bedroom, and then hear her skittering across the house at 1 a.m. to pull out her sleeping bag on our floor. This set-up is our latest negotiation to maintain our privacy, and the hour she sneaks in is steadily creeping earlier. It's our fault. Don't be like us. But when do you put baby in their own room?

More Like This
Here's The Deal With Babies Who Sleep With Their Eyes Half Open
These Smart Bassinets Might Get You A Full Night's Sleep
18 Best Sand Toys In 2021 For Babies, Toddlers, & Kids
You Will Not Regret This Perfect Baby Pool From Target

The American Academy of Pediatrics (AAP) says that infants should room share with their parents for at least the first six months of age — preferably a year. Any time after those recommendations is fair game if your baby's presence at your bedside keeps you in a constant state of wakefulness.

Of course, your baby needs to be able to sleep through the night and have outgrown nighttime feedings before you move her, but rest assured that this study conducted by the organization found that room-sharing with babies between 4 and 9 months old resulted in less sleep for both mothers and infants. However, there was a higher incidence of non-approved sleep items in the younger babies' cribs that could have contributed to better sleep, like blankets or positioners, so avoid those.

But why the minimum of six months? Aside from the ease of having the baby nearby for frequent wakings and feedings, the risk of SIDS is cut in half and room-sharing is much safer than bed-sharing, according to the AAP. A separate crib or bassinet within arm's reach will do just fine. New parents may feel that bringing their baby into bed with them is the natural thing to do — and it certainly feels that way — but it vastly increases the baby's odds of SIDS, strangulation, and suffocation. And good luck blasting them out once they're not so little.

"I definitely recommend at least the first six months because most kids still need a night feeding and it’s easier to have them in your room," says Christine Stevens, a sleep consultant in Washington, D.C., in an interview with Romper. "But babies make a lot of noise at night so that can be disruptive to the parents."

After that six-month window, however, when to move the baby comes down to personal preference. But be consistent, she says. "Even if they don’t quite sleep through the night, I leave it up to the parents because sometimes the situation is that they can’t move baby to another room. Every family is different," she continues. "Once parents decide to move them to a different sleeping space, they have to be absolutely consistent. If they start being inconsistent and let them change rooms at 3 in the morning, it's going to cause confusion, stress, and an association with waking up at 3 in the morning."

To ease the transition, Stevens suggests that parents spend more time with the baby in their own room during waking hours. Incorporating the space into playtime and their bedtime routine will help children feel more familiar with the room and they may not be as anxious when they awake in a different place.

Sometimes, she continues, parents talk themselves into putting off the move because doing so feels like adding more disruption to a relatively wakeful sleep routine.

"A lot of the time, the parents accept that they’re never going to get more than three or four hours of sleep," she says. "If so and you’re happy with your sleep situation then that’s fine; I don’t call that a good night of sleep. Parents have to be ready to make a change because hoping things will get better is not going to change your situation."

Of course, every family is different and has different priorities. If your priority is sleep at any cost, perhaps bite the bullet and move your older baby into their own room so everyone can get a good night's sleep.