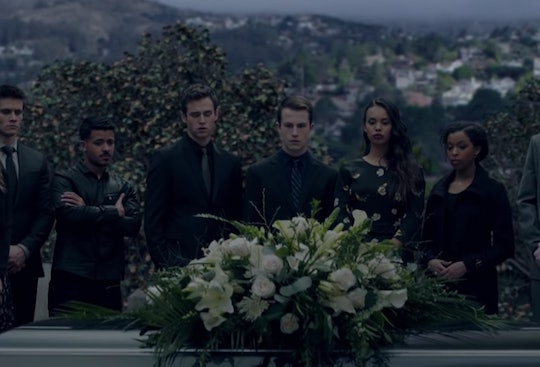 Netflix's hit but controversial series, 13 Reasons Why, will be back for more sooner than you think. In a new teaser for the upcoming third season, it was revealed that the series would no longer be about the death of Hannah Baker, but instead the death of her rapist — Bryce Walker. The intense video also revealed some very important information: When does 13 Reasons Why season three premiere? Fans of the series will be happy to know that starting Aug. 23, the mystery of who killed Bryce Walker will unfold throughout new episodes.

If you aren't caught up on 13 Reasons Why, fair warning: major spoilers ahead. But for those of you who need a refresher, Season 2 of the young adult drama followed Clay, Jessica, Alex, Justin, and the rest of the characters throughout the trial for Hannah's death. A lot of things happened throughout the season, including Jessica testifying, Bryce eventually being charged with sexual assault, and, finally, a funeral for Hannah. Many hoped the justice system would deliver the punishment that Bryce deserved for raping both Jessica and Hannah, but unfortunately that wasn't the case. He was handed three months of probation, which was just slightly worse than the judge slapping him on the wrist.

From the second the Season 3 teaser begins, it's clear that someone else is dead. After all, it begins with police sirens, flashing lights, and Deputy Standall kneeling down with a flashlight in what appears to be an empty field. From there we're taken to a suspicious-looking Tony, Justin, and Tyler as they finish putting something in the trunk of Tony's car. Then we have Zach and Chloe looking awfully cozy on a set of bleachers, only to immediately pull away from each other when the lights go on. We quickly pan to the halls of Liberty High, where Jessica and her friends confront Monty and the jocks, followed by Monty being choked out in the boys bathroom. Last but not least, we focus in on a new character, Ani, trying to clean blood out of something in the sink. But, who is watching her? Clay.

It feels safe to assume that Ani is also the one narrating the teaser, in which she tells Deputy Standall that the kids at Liberty High are "connected by their secrets." The last thing we her Ani say is, "Anyone could have done this." That's when the camera pulls back away from Clay revealing the entire group of characters standing over a casket — Bryce's casket.

The tables have surely turned on 13 Reasons Why, as now it's Bryce's mom, Nora Walker, looking for answers. And who does she turn to? Clay and his friends, of course.

At the end of the 13 Reasons Why teaser, a website flashes across the screen: WHOKILLEDBRYCEWALKER.COM. Interestingly enough, you can only access the site from your mobile devices.

As noted earlier, the third season of 13 Reasons Why will premiere on Netflix starting Aug. 22. You might want to black that day out on your calendar so you can get to the bottom of the murder mystery before anyone spoils it for you on social media.