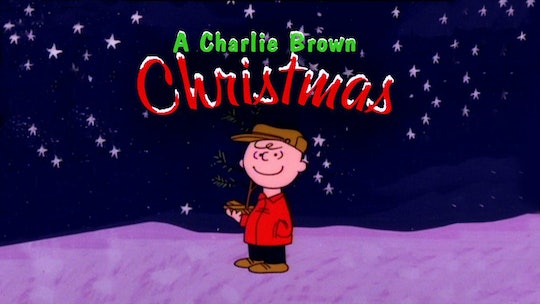 When Does 'A Charlie Brown Christmas' Air? He's Just As Stressed About The Holidays As You

Thanksgiving has wrapped up, but there's still one last Peanuts holiday special on the calendar left this year before winter hits and we can never have nice things again (at least, not until It's the Easter Beagle, Charlie Brown). For those of us without A Charlie Brown Christmas in our personal digital collections, ABC will be airing it ahead of the holidays, so you can DVR and bust it out as necessary over your various holiday parties, Christmas Eve dinners, and, let's be real, your Santa-anticipation and chill dates. So when does A Charlie Brown Christmas air? You can catch it on ABC as early as Thursday, Dec. 1, from 8:00pm-9:00pm ET.

The animated special first premiered in 1965, though networks have been airing the digitally remastered version in recent years. In it, a melancholy Charlie Brown laments about how depressing the materialism of Christmas is. Lucy coaxes him into directing the school Christmas pageant to cheer him up, but he can't seem to get a handle on his cast, or get them to focus on the true meaning of Christmas, in light of their desire for a flashier pageant. Dejected, Charlie goes off and buys his now-iconically sparse Christmas tree, hoping to try and use it to dress the stage for the pageant. Sadly, it's little branches can't hold up the giant ornament he chooses to decorate it with and he fears he's killed it. Later, the rest of the Peanuts gang come looking for Charlie Brown, after making fun of his tree, and they decorate it to surprise him.

Of course, the music of Vince Guaraldi Trio, which scores the special, is good enough to be the official soundtrack of your holiday party on its own. Luckily, you can find the whole A Charlie Brown Christmas album on Spotify to do just that. It features the Peanuts classic "Christmastime Is Here" and the gang proudly belting out "Hark the Herald Angels Sing," among other iconic tracks from the special. A Charlie Brown Christmas was the first Peanuts special Vince Guaraldi composed the music for, before going on to score seventeen more of them (all the way up to It's Arbor Day, Charlie Brown), plus the 1969 feature film.

So go ahead and get cozy with your own gang before pulling up to the special this year. Or at least vent your holiday shopping stress vicariously through Charlie Brown before your troops finally rally around you.