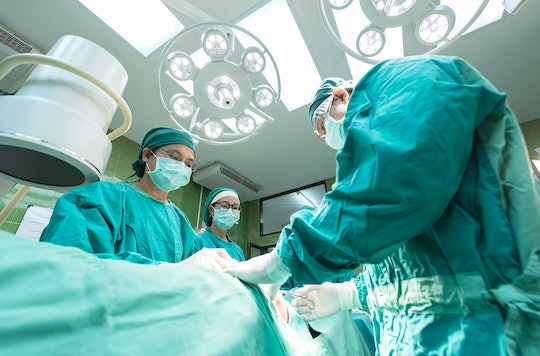 This generation of mothers is taking charge of their birthing experience in a booming way and it seems like the days of blindly following a physician's protocol will soon be largely behind us. We're not content to be passive participants in one of the biggest events of our lives. This new take-charge attitude means many women are seeking to avoid Cesareans, while others are purposefully choosing to have them. Of course, many women inadvertently find themselves advised to opt for a C-section. When does a doctor decide it's time to have a C-section, and what happens if you disagree? One prominent OB-GYN breaks down the process of making this weighty decision for us.

Dr. Kecia Gaither, Director of Perinatal Services at NYC Health+Hospitals/Lincoln, tells Romper that a mother always has the final say regarding the delivery of her baby. "No one can make a woman have a cesarean delivery," Gaither assures women. "The medical provider advises the patient accordingly in an attempt to have a good perinatal outcome for mother and baby." But ultimately, the woman has the right to consent to a C-section or not.

Yet not every woman experiences this. There are plenty of disgruntled postpartum mothers who feel they were pressured or bullied into agreeing to a C-section by their doctors. Sometimes busy OB-GYNs are accused of not wanting to wait through a lengthy labor, but there are often very grave reasons they may urge women into surgery, too.

According to Gaither, a physician may determine that a C-section is the most appropriate course of delivery for several reasons, and the timing of the decision often varies from patient to patient. "An emergency cesarean is just that, a life-threatening emergency operative delivery for the benefit of either mother or baby, or both," explains Gaither. In contrast, "an elective or planned delivery is just that — planned, non-emergent, generally after 39 weeks of gestation pending the medical condition."

A vaginal delivery may have been someone's initial birth plan, but fetal distress in labor or failure to progress during labor can result in a change of plans. In cases like these it can obviously be difficult for a woman to truly feel like an active participant in the decision-making process due to the pain and exhaustion she is experiencing in the midst of a likely chaotic moment, but sometimes the decision must be made quickly.

A planned C-section, on the other hand, is a decision previously arrived at by both OB-GYN and mommy-to-be. In these cases, there is usually a medical condition that could prevent a safe and healthy delivery. Examples of such would be placenta previa, eclampsia, or a prior uterine or pelvic surgery which makes a vaginal delivery impossible, Gaither says.

In addition to such medical conditions, there are also more controversial reasons for planning a cesarean, including seeking to avoid the unpredictability and trial of labor, and having had a prior C-section in the past. In the case of the latter, a Vaginal Birth After Cesarean (VBAC) is often a safe option, but not every OB-GYN is willing to undertake them for every woman. Another reason considered controversial in some circles is suspected fetal macrosomia, which is a fancy name for a large baby.

In these cases of planned or elective C-sections, women should begin discussing delivery possibilities with their care provider at least by the start of the third trimester. A good OB-GYN will offer well rounded information on the pros and cons of the surgery, and a woman should have many weeks to do her own research and ask questions from one appointment to the next. Above all, remember: Your doctor is there to offer experienced wisdom, but should never make the decision for you. That part's all you, mama.