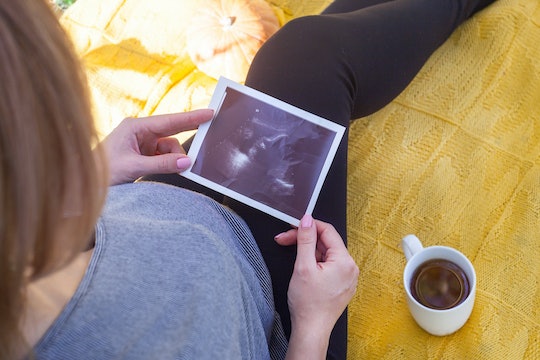 Here's When A Fetus Has A Heartbeat, According To Science

If I'm being honest, I must admit those fruit comparisons pregnant women make when they reveal how far along they are in their pregnancies are, um, a little strange. When I ask a mom-to-be how far along she is, I don't usually expect to hear she's housing a fetus the size of a pomegranate seed, you know? I guess I'm a fan of the more scientific approach, which is why I've found myself asking more than a few pregnant women the following question: "When does a fetus have a heart rate?" Sure, I guess it's not really as exciting a question as asking about the growing baby's sex or the expecting parents' nursery decorations, but science is pretty cool, you guys, and the more I learn about the wonder that is pregnancy, the more I'm hooked.

According to BabyCenter, a fetus will have a heart rate when it is six weeks gestation, or about the size of a pomegranate seed. Mind blown, right? But while a fetus will first show a heart rate pretty early in the pregnancy, but you likely won't hear it that early. Why? Mot women don't know they're pregnant that early. According to The Mayo Clinic, morning sickness usually occurs around the eight week of gestation, which is generally when women start to realize their bodies are growing human beings.

So while the fetus has had a beating heart for some time, most women don't get to hear their baby's heartbeat until 12 weeks, when the heart is a little more easily located by the fetal Doppler monitor. According to BabyCenter, "Many women say that the beating of their baby's tiny heart sounds like the thunder of galloping horses. Hearing it for the first time can be very moving."

You can buy or rent a fetal Doppler monitor so you can listen to your baby's heartbeat at home, although BabyCenter points out that this might not be the best option because it takes some skill to find a fetal heartbeat. If a woman has a difficult time locating a fetal heartbeat, it might cause more panic than reassurance. In other words, it's probably best to leave the heartbeat detecting to the professionals.

What are some other things that are growing in your baby while it's barely bigger than a pomegranate? Well, your baby's brain is growing and their face is starting to form at week seven in the pregnancy, The Mayo Clinic explains, reporting: "Depressions that will give rise to nostrils become visible, and the beginnings of the retinas form." By week eight, "Fingers have begun to form. Small swellings outlining the future shell-shaped parts of your baby's ears develop and the eyes become obvious."

So while your baby is growing at warp speed, how long does a fetus have to grow inside the womb until it would survive outside of your belly? The short answer is 22 weeks, but doctors are quick to point out that a baby faces a number of hurdles when born that premature. BabyCenter explains, reporting: "Doctors now consider 22 weeks the earliest gestational age when a baby is "viable," or able to survive outside the womb. But this is still extremely premature, and a baby born at this age will need a great deal of medical attention. Even if he survives, the risk of permanent disability is very high."

Those prematurity disabilities can include problems with vision and hearing, cerebral palsy, intestinal problems that can affect nutrients being absorbed later in life, and asthma, according to The March of Dimes. It's important that premature babies get continued care after they are released from the neonatal intensive care unit (NICU) to counteract any other social and developmental disabilities that may be present due to their prematurity.

So whether a fetus is the size of a pomegranate seed or coming up on 22 weeks gestation, the more time spent in the safety and security of a womb, the better. After all, every parent wants that first heartbeat to grow stronger.