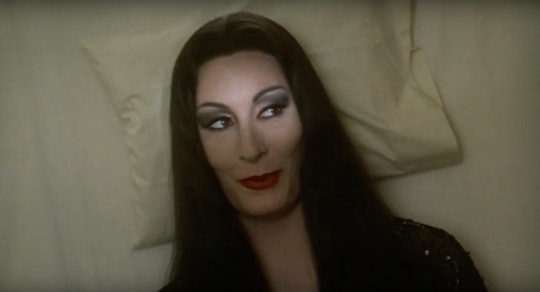 Freeform's epic 31 Nights Of Halloween special has become required viewing for families all over the U.S., not least of all because it is guaranteed to air classics like Hocus Pocus and Addams Family Values. The network is airing Hocus Pocus a record 27 times this time, but for those of you wondering when Addams Family Values airs on Freeform, you'll have 12 chances to catch it this month. Whether you're airing it as a feature presentation for the whole family or just have it on in the background while you bake autumnal treats, it just wouldn't be Halloween without the Addamses.

Other cameo appearances include ones from David Hyde Pierce, Peter Graves, Tony Shalhoub, and Nathan Lane, who went on to play Gomez on Broadway in the musical adaptation of The Addams Family. Cementing the film's beloved cult status is that Julia, who played Gomez in both movies, died less than a year after Addams Family Values was released.

Despite being a campy, horror-adjacent comedy, the film received a few critical accolades, including a 1994 Oscar nomination for Best Art Direction-Set Decoration for Ken Adam and Marvin March, and a 1994 Golden Globe nomination for Anjelica Huston in the Best Performance by an Actress in a Motion Picture — Comedy or Musical category, according to IMDb.

The film was considered a box office disappointment, however, barely recouping the money it cost to make, and earning less than half of what The Addams Family did.

31 Nights of Halloween is currently airing on Freeform.

More Like This
The Addams Family Is Not Exactly As Kid-Friendly As You Remember
'The Proud Family: Louder & Prouder' Is Returning For Season 2 On Disney+
The Best Movies Airing On Freeform’s 31 Nights Of Halloween In 2022
All The Nights Hocus Pocus Airs On TV In October 2022