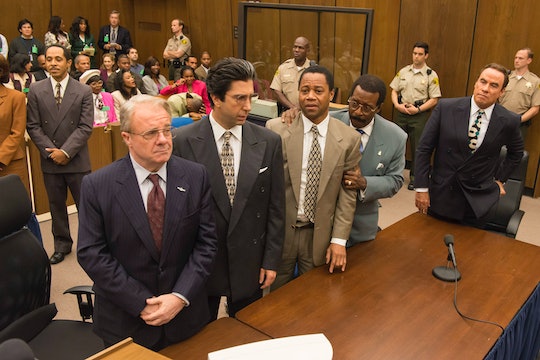 When Does 'American Crime Story' Season 2 Premiere? Prepare To Wait

The time has finally come — The People v. O.J. Simpson: American Crime Story has come to an end. Over the course of 10 episodes, FX repurposed and retold the trial of the century with a cast that was impossible to compete against. But now, it's over. As sad as it is, the O.J. Simpson trial will quickly fade away until someone else takes on the epic tale (probably within the next year). But, that doesn't mean that Ryan Murphy & Co. are calling it quits on another season of the series. So, when is American Crime Story Season 2?

Like Ryan Murphy's other successful venture, American Horror Story, American Crime Story is an anthology, meaning it will change season to season. So, as much as we love Season 1, it will all be wiped away come Season 2. The good news is there is already talk about a Season 2. So, let's at least celebrate that little known fact. Unfortunately, we don't know when Season 2 will air yet. But, if we assume that the second season will follow a similar air date as its predecessor, then we can possibly expect a second season in early 2017. Yeah, I know, that's a really, really long time away.

The good news is that the second season theme has already been (unofficially) announced. According to The Hollywood Reporter, the second installment of American Crime Story will be about Hurricane Katrina. "The working plan, according to Murphy, is to follow a group of six to eight people in an attempt to examine all sides of the tragedy, from the Superdome to the hospital to those who were put on buses and dropped off with babies who were forced to wear trash bags for multiple days," The Hollywood Reporter reports.

It is certainly a departure from the first installment. The O.J. Simpson trial seems to have a beginning, middle, and end. Hurricane Katrina — and its aftermath — doesn't. Will Murphy follow certain true stories or will he fictionalize and dramatize characters for the sake of plot? If anything, I'd say his choice in Season 2 can only solidify that Murphy knows no bounds when telling a story — true or fictionalized.