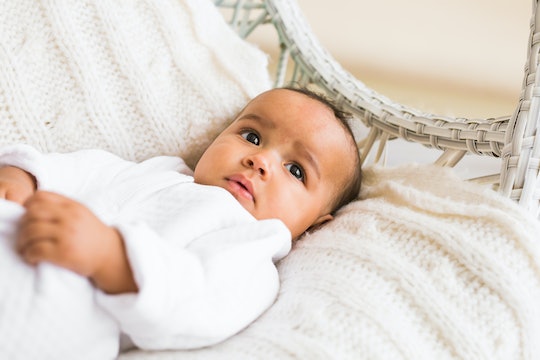 Here's When Your Baby Starts Having Memories

Let's say it's Friday afternoon and you ask me to tell you what I ate for dinner on Monday. Chances are, I would struggle to recall the meal, or any details of my plate whatsoever. My 7-year-old son, however, would be able to rattle off a menu from the entire week with such accuracy that I would suddenly remember how much I enjoyed that eggplant parmesan. My son's memory has proven to be crystal clear time and time again — but when did this ability begin and will it fade away? When does baby start having memories? Perhaps their little brains are capable of more than we give them credit for.

As an adult, I often question my memory, blaming it for being faulty on many occasions (like when I can't find the sunglasses that are resting on my head). But a child's brain seems to be less cluttered and better equipped to store and recall information, which is an inborn skill that kicks in soon after birth. According to Baby Center, breastfed newborns can recognize their mother's scent within one week of life. This first sign of memory function develops quickly, and by a baby's second month they recognize familiar voices and faces besides their mother.

Within a short time, your little one is beefing up the muscles necessary for more sophisticated memory storage. As their brain grows and develops, so does their capacity for more complex memory skills. As Jerome Kagan, a Harvard University professor of psychology told ABC News, one sign of a child's developing memory starts around 9 months, when children become less willing to leave their parent. Noticing when mom's gone means the baby remembered her being there earlier.

Even though memories begin forming extremely early in life, how long do those memories stick around? It's long been believed that no adult is capable of remembering anything before the age of three, but new research is showing that it's not until 7 years old that our earliest memories start to fade, as Psych Central explained. It is around this time that the phenomenon known as "childhood amnesia" begins to kick in. So if you want to help your kiddo remember what happened to them in the early years, best to capture as many of those adorable childhood moments on camera as you can.

Make the most of those first years as you can, and focus not on how much your baby will remember later in life, but on the connections and meaning that the two of you shared during those moments. Because even though the details may not remain, all the good feels will nourish their soul.

More Like This
Abbot's Formula-Producing Plant Can Reopen In As Early As 2 Weeks — Now What?
Can You Help Your Baby’s Hair Grow?
These Darling Baby Boy Names All Start With The Letter "D"
Here’s What You Need To Know About That Viral 1960s Baby Formula “Recipe”