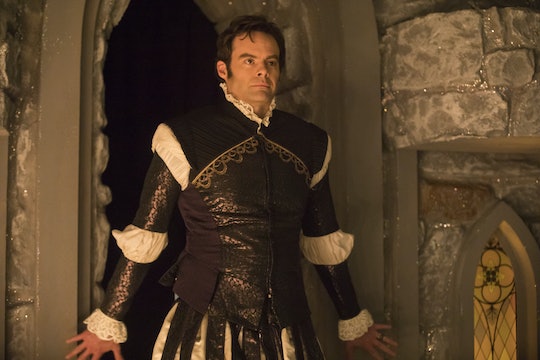 Bill Hader's 'Barry' Will Be Back For More Killing & Comedy

Bill Hader's dark comedy series, Barry, has been a hit for HBO, so it's not all that surprising that it's already been renewed for a second season. With the first season now coming to a close, people understandably want to know one thing: when does Barry Season 2 premiere? Buckle up, because it's going to be awhile.

A premiere date hasn't been set just yet, but if Barry is like every other HBO show, it'll be about a year before the second season is released. So fans should probably expect the new season to come out sometime in March 2019. However, to make sure you don't miss it, just keep an eye out for a premiere date announcement from HBO, though it'll probably be some time before that announcement comes.

If you're unfamiliar with Barry, the series follows Barry Berkman (Hader), a former U.S. marine-turned-contract-killer, who finds himself in Los Angeles, and ends up in the performing arts as "Barry Block." Barry now juggles his life in his acting class with his life as a killer, and of course, that's not always easy. Hader co-created the series alongside Silicon Valley producer Alec Berg, and both serve as executive producers on the show. The series also stars Stephen Root, Sarah Goldberg, Henry Winkler, Glenn Fleshler, Darrell Britt-Bigson, Anthony Carrigan, Kirby Howell-Baptiste, Alejandro Furth, and Andy Carey.

Over the course of the first season, fans have watched as Barry has gone from killing people with ease to now feeling remorse after deciding to kill his friend Chris in the penultimate episode of the season. It seems that Barry's work with his acting class has made him want to change his ways and in the preview for the finale, Barry even says he's "done with all of this," presumably meaning his life of crime.

Additionally, the ongoing tension between the Chechens and the Bolivians seems to have finally broke out into a full-on war between the two groups in the finale. At the same time, the episode description suggests Moss and her team may finally make an arrest in the Madison case. Could it be Barry who ends up in handcuffs? Hader revealed to Collider that while the penultimate episode was really about Barry and his class, this final episode will be taking a closer look at "the crime side of stuff and if [Barry] can manage to get out of that and be in the class full time."

Hader also noted that the conclusion to the finale really surprised the writers, which means it will more than likely surprise the fans as well. Here's hoping it's not a wild cliffhanger, especially if fans do have to wait a year for answers.

Other than that though, Hader wouldn't give too much away about what to expect in the finale, which means anything could really happen. Hopefully, whatever does happen next won't be bad for Barry and he'll somehow be able to walk away from his killing days unscathed. However, this seems quite unlikely. It's much more likely that there will be another murder before the finale is over, but perhaps this one won't be as gut-wrenching as the loss of Chris.

Of course, the only way to find out how this season ends is to tune in for the finale and see for yourself. This is one you'll definitely want to watch live to make sure no one spoils whatever the surprising ending is for you. So make sure to tune into to HBO on Sunday, May 13 at 10:30 p.m. ET to see how Season 1 of Barry comes to an close. You won't want to miss this!