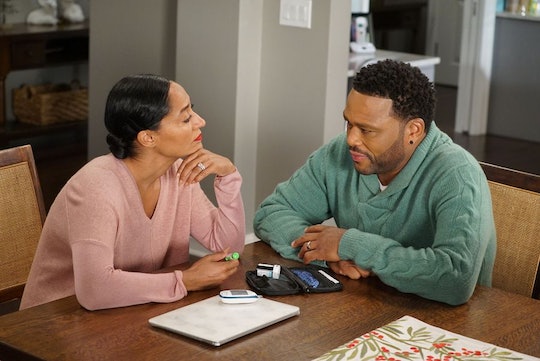 ABC's ‘black-ish’ Will Be Back Before You Know It

As this year comes to a close, many of our favorite shows are wrapping things up for the holidays. But don't worry — many of them will be back at the start of 2018. This Tuesday night, it's black-ish that's finishing up the first half of its season, leaving many fans to speculate when black-ish will return from its winter hiatus. Thankfully, it shouldn't be gone for very long.

The fourth season of black-ish began on a high note with its "Juneteenth: The Musical" episode, and has only continued to top itself since then. Thus, it makes sense that fans aren't ready to say goodbye — but while the show will most certainly be back, it remains unclear when exactly that will be. The return date has yet to be announced, but based on the previous season it seems fair to assume that Season 4 will pick things back up in early January. Therefore, the wait between episodes won't be too bad and if you've fallen behind on this season (or missed it entirely), this would be the perfect time to catch up.

In addition to the return of black-ish, the new year will also bring the series premiere of the show's spin-off, grown-ish. The new series follows the eldest Johnson kid, Zoey (Yara Shahidi), as she begins college at Southern California University. The spin-off will have its two-episode season premiere on Wednesday, Jan. 3 on Freeform.

Joining Zoey in her new college life is Charlie Telphy (Deon Cole), her dad's coworker who will now be teaching at Zoey's school. Also starring in the new series is The Secret Life of the American Teenager star Francia Raisa as Zoey's roommate, Ana Torres; singing duo and sisters Chloe x Halle play twin track stars Skyler and Jazlyn; and Trevor Jackson will reprise his role as Aaron, who he played in the backdoor pilot on black-ish.

Fans are already excited about the spin-off, which many say is the present day version of A Different World. If you've never seen A Different World, which is truly a shame, it was originally the spin-off to The Cosby Show, in which the second eldest daughter in the family, Denise, went off to college. However, A Different World quickly became its own unique series without Denise present. It doesn't seem like that'll be the case for grown-ish, though.

Zoey is front and center in the new series and just like her dad narrates black-ish, she'll be the voice narrating grown-ish. Also, just because Zoey's off at school now doesn't mean Shahidi's leaving black-ish behind completely. As has already been seen this season, Zoey will continue to pop up throughout the season, though she'll probably start to appear less and less as time goes on. Still, Zoey is the eldest Johnson sibling, and since she decided to go to school in California, she's not too far from home. She's so close, in fact, that it looks like her mother will be dropping in on grown-ish to set Zoey straight on a few things.

Therefore expect to see a few crossovers between both shows, which will only make the spin-off even more fun to watch. Until then, you can enjoy a Christmas-filled episode for the black-ish midseason finale. During the episode, Dre is diagnosed with Type 2 Diabetes, but has decided he will cure himself, because of course that's what he would do. However, things get a bit messy at his company's holiday party. At the same time, Jack is convinced that his new baby brother, Devante, hates him, so he enlists the help of Junior and Diane. All of this sounds like a recipe for disaster but also a lot of fun.

You can see the midseason finale of black-ish when it airs Tuesday night at 9 p.m. EST on ABC.